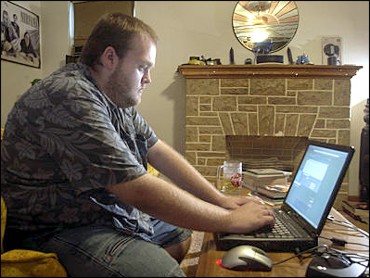 Sean Canady used to record his frustrations, desires and other deep, personal thoughts in a black, spiral-bound notebook. Two years ago, he gave that up for something far less intimate — the Internet.

Canady is one of a growing number of people who are using online journals to share their triumphs and pains in hopes that other people will read them and respond. The largest such site, LiveJournal.com, has more than one million members.

While the sites are somewhat similar to online bulletin boards or chat rooms, Web journals aren't limited to a specific topic or discussions.

And unlike blogs, which are dated musings on certain subjects and often carry links to similar blogs, online journals are designed to be more like a coffeehouse, where a community regularly gathers, building friendships and connections as they share personal details.

"This diatribe seems to be incensed with morose and depressed sentiments," Canady wrote recently.

He was frustrated over the drudgery of his job and his inability to consistently connect with his friends.

"But I write this with anger, with frustration, with disappointment. I shed no tears. You don't cry over your own funeral pyre."

Canady, a 21-year-old database assistant from Kansas City, Kan., said in an interview he doesn't mind airing his life for the entire world.

"I figure anybody that's reading it cares about who I am and it helps them understand who I am and why I do the things I do," he said.

Plus, he said, writing online helped him overcome his insecurities and allowed him to become more open and confident.

LiveJournal started in 1999 when founder Brad Fitzpatrick wanted a quicker and easier way to update his journal on his personal Web site. He found existing programs inconvenient.

At first, the site was simply a blank sheet, for people to write as if in a regular journal. Later, though, Fitzpatrick added "comments" and "friends" features so entries could be linked to other people's thoughts, ideas and experience.

"It's a great community. You meet a lot of people there and you could browse the whole day and never get bored," said Fitzpatrick, 23, who also started a polling site, freevote.com, but still runs the business and technical aspects of LiveJournal from Portland, Ore.

LiveJournal's popularity has spawned similar sites like DeadJournal.com, uJournal.org and Diaryland.com, which run on the same concept and structure as LiveJournal.

Basic use of LiveJournal is free, but joining requires an invitation from a member. Paid memberships, which run about $2 a month, give users access to faster servers for faster updates, customized icons and graphics and the ability to send text messages to other subscribers through mobile phones.

LiveJournal postings can be kept entirely private or open to all users, or set to be read only by designated friends. Users are identified by aliases or in some cases their real names.

Jennifer Hagen, a 22-year-old student from Goodyear, Ariz., said she loves the "instant gratification" of getting other people's feedback. But she still uses a paper journal to write about anything she doesn't want to share.

Dae-Ho Chung, a 20-year-old student at the University of California, Berkeley, checks his friends' journals at least every other hour, every day.

"I do it just to see if other people's lives are parallel to mine, ... to see if they have experienced things I haven't experienced," he said.

Cheryl Dowling appreciates online journaling if only for the practical advice she gets. Once frustrated by leaks in her bathroom, Dowling turned to LiveJournal and received countless tips on how to fix them.

"It's different when people have the ability to comment on it by giving you another perspective. You can share accomplishments and happiness," said Dowling, a 27-year-old Web designer from Boston. "The biggest appeal and difference between on- and offline is the other people that are involved in it."