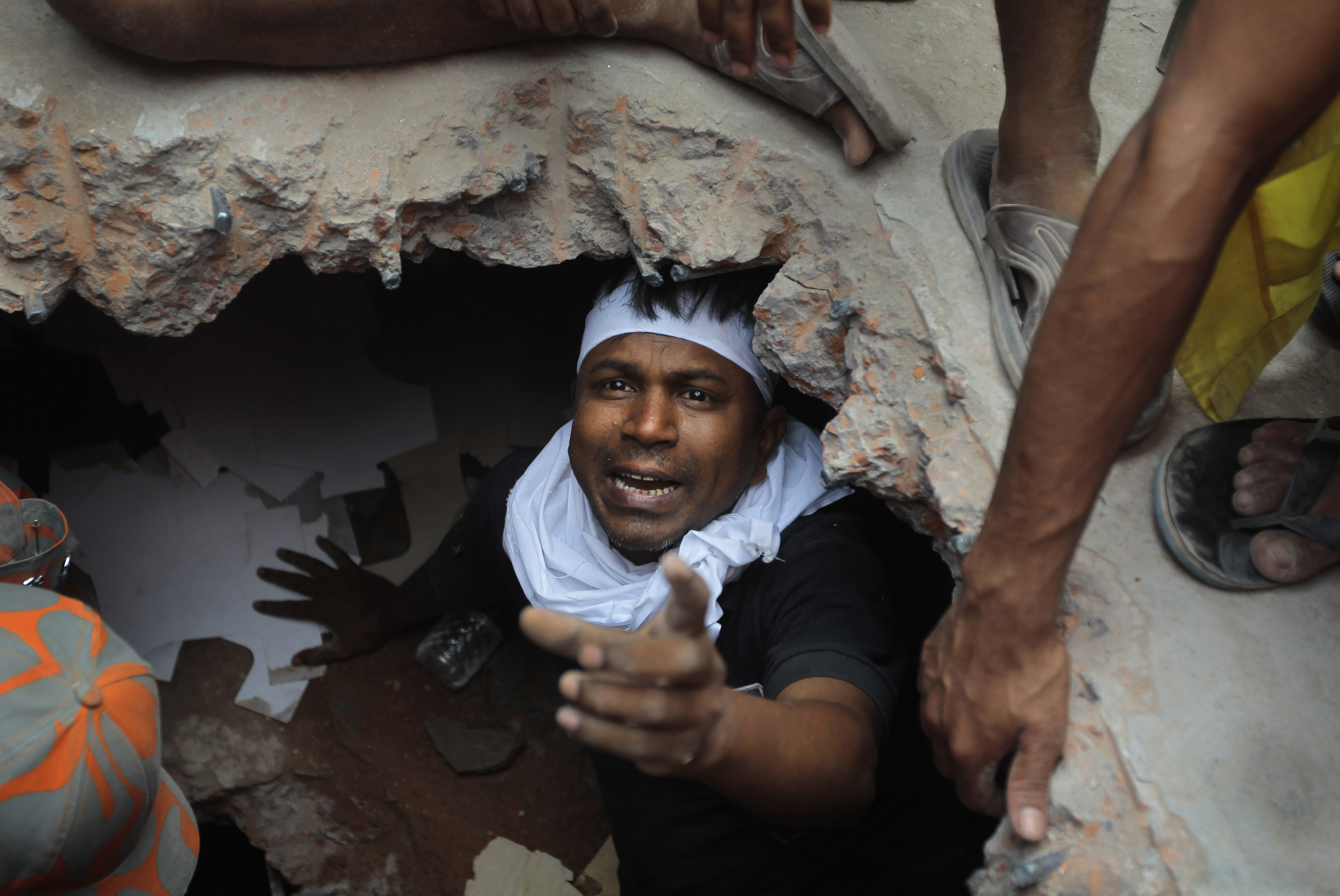 The horrible collapse of a garment factory building in Bangladesh has renewed questions over whether Western companies should be held accountable for lax safety standards in the factories where their products are made. Below, we get you up to speed on the debate.

First off, what's the latest?

The news keeps getting worse. Two days after the collapse, the death toll is now above 300; some workers remain trapped beneath the wreckage, with rescuers working frantically to save them - sometimes cutting off limbs to get people free. While officials say that 2,200 people have been rescued, the Associated Press has reports the "smell of decaying bodies" amid the wails of workers' relatives at the scene, and the death toll is expected to rise. More than 3,000 people worked at the site.

Could the tragedy have been avoided?

Absolutely. Police ordered the building evacuated the day before the collapse, after workers reported cracks in the structure. But authorities said the building owner assured factory owner required the workers to come to work despite the order.

Al Jazeera reports that thousands of protesting workers have clashed with police since the collapse. Police firing tear gas and rubber bullets to keep protesters at bay. One deputy police chief said workers are demanding the arrest and execution of the owner of the building - who has reportedly gone into hiding - and those who owned the factories it contained. Some protesters have set fire to factories and smashed vehicles.

Based on calculations by the International Labor Rights Forum, an advocacy group, more than 900 people have died in factory fires in Bangladesh since 2005. In November, more than 100 people were killed in a fire at a factory that was producing clothes for Wal-Mart, Disney and other Western companies. Workers said the exit doors to the factory, which had lost its fire safety certification months earlier, were locked and bolted, prompting some to leap to their deaths from the burning building. In January, seven workers died at another factory fire in the country, amid reports that the emergency exit was locked from the outside. It was just one of dozens of fires since the 2005 tragedy.

Because it's a cheap place to make clothes. The country's minimum wage is roughly $38 per month - as the BBC reported last year, China has turned to Bangladesh for manufacturing as its labor costs have risen.

Garment manufacturing is a crucial component to the country's economy: More than 4,000 garment factories generate 80 percent of Bangladesh's exports, worth about $20 billion per year. The nation is among the biggest exporter of garments in the world, with most going to the United States and Europe.

Government officials have pledged to improve worker safety, but they are also skittish about taking steps that would increase production costs and potentially result in the industry moving somewhere even cheaper. According to Human Rights Watch, there are just 18 inspectors monitoring thousands of factories in the Shaka district, the center of the industry. The group also said that factory owners - a powerful force in Bagladesh, with ties to government officials - are usually given advanced notice before an inspection.

Those factory owners, meanwhile, face pressure not to slow or cease operations when there are safety issues because they face pressure to fill orders from Western retailers by strict deadlines. That pressure has been exacerbated since the start of February by ongoing strikes, protests and violence which, the Financial Times reports, has effectively shut down transportation routes.

"Working conditions in Bangladesh are poor, as many plants operate on an illegal basis without having a license and clearance from the fire department," the European Union said in calling for improved working conditions in February. "Western retailers already criticized the conditions of the Bangladeshi garment plants for not complying with safety rules, but the major Western brands still place orders."

Was there any progress after earlier tragedies?

Not much, at least as far as workers' advocates are concerned. After the January fire, the country ordered that all its factories be inspected and insisted that the owners stop locking exit doors. But the tragedies have not prompted major reforms by the Bangladeshi government.

Frustrated by a lack of action by the government, worker advocates have pressured the companies importing the garments to take steps to make workers safer. One proposal, called The Bangladesh Fire and Building Safety Agreement, would create a legally binding and rigorous independent inspection and oversight system. It would also allow workers to refuse to work in dangerous conditions. (Efforts to unionize workers in Bangladesh have largely been met with hostility or worse; last year labor rights activist Aminul Islam was tortured and murdered.) Inspections would be funded by as much as $500,000 per year from each company.

But only two companies have signed onto the agreement, short of the four necessary for it to take effect. Wal-Mart, Gap, H&M, JCP, Abercrombie and Kohl's are among the companies that have refused to sign on, instead taking their own steps to address worker safety. (The companies that have signed on are Tchibo, a German retailer, and PVH Corp., which owns Calvin Klein and Tommy Hilfiger.)

Gap announced in March that it would spend up to $22 million to improve safety at its factories in Bangladesh, and it has hired its own indipendent fire inspectors in the country. Bill Chandler, Head of Public Affairs for Gap Inc., told CBSNews.com it "did not have a business relationship with any of [the] factories in the building that collapsed this week."

Wal-Mart said in January that it would cease working with contractors that use unsafe practices, and recently vowed to spend $1.8 million to train factory managers in Bangladesh about fire safety. "We are saddened by this tragic event," the company said in a statement to CBSNews.com. "...We remain committed to promoting stronger safety measures in factories and that work continues."

Advocates say private audits and other efforts by these companies has done little to improve the situation. "Global companies and consumers profit from cheap labor in Bangladesh, but do little to demand the most basic and humane conditions for those who toil on their behalf," said Brad Adams, Asia director at Human Rights Watch. "It is time for companies to say that they will take no clothes from companies that do not meet minimum standards."

One complicating factor in oversight is the fact that owners often use subcontractors to produce garments. Wal-Mart said that while its "investigation has confirmed Walmart had no authorized production in this facility," it will act if it learns there was production through subcontracting, saying it has a "zero-tolerence policy" for unauthorized subcontracting. The New York Times reported that activists searching the rubble have found tags and documents suggesting that production for Mango and Benetton, among other companies, though those brands are distancing themselves from the disaster. (The maker of Joe Fresh and Irish retailer Primark have admitted to using the facility.)

Advocates hope that the latest tragedy will spur companies to increase their efforts to keep workers safe. There is speculation that the latest tragedy and the ongoing strikes and violence will spur companies to move manufacturing away from Bangladesh. But that could simply shift the fundamental problem elsewhere in what critics call a "race to the bottom" by global brands.

"How many more workers have to die," said Stott Nova of the Worker Rights Consortium, "before these corporations are willing to take the steps necessary to put an end to this parade of horror?"