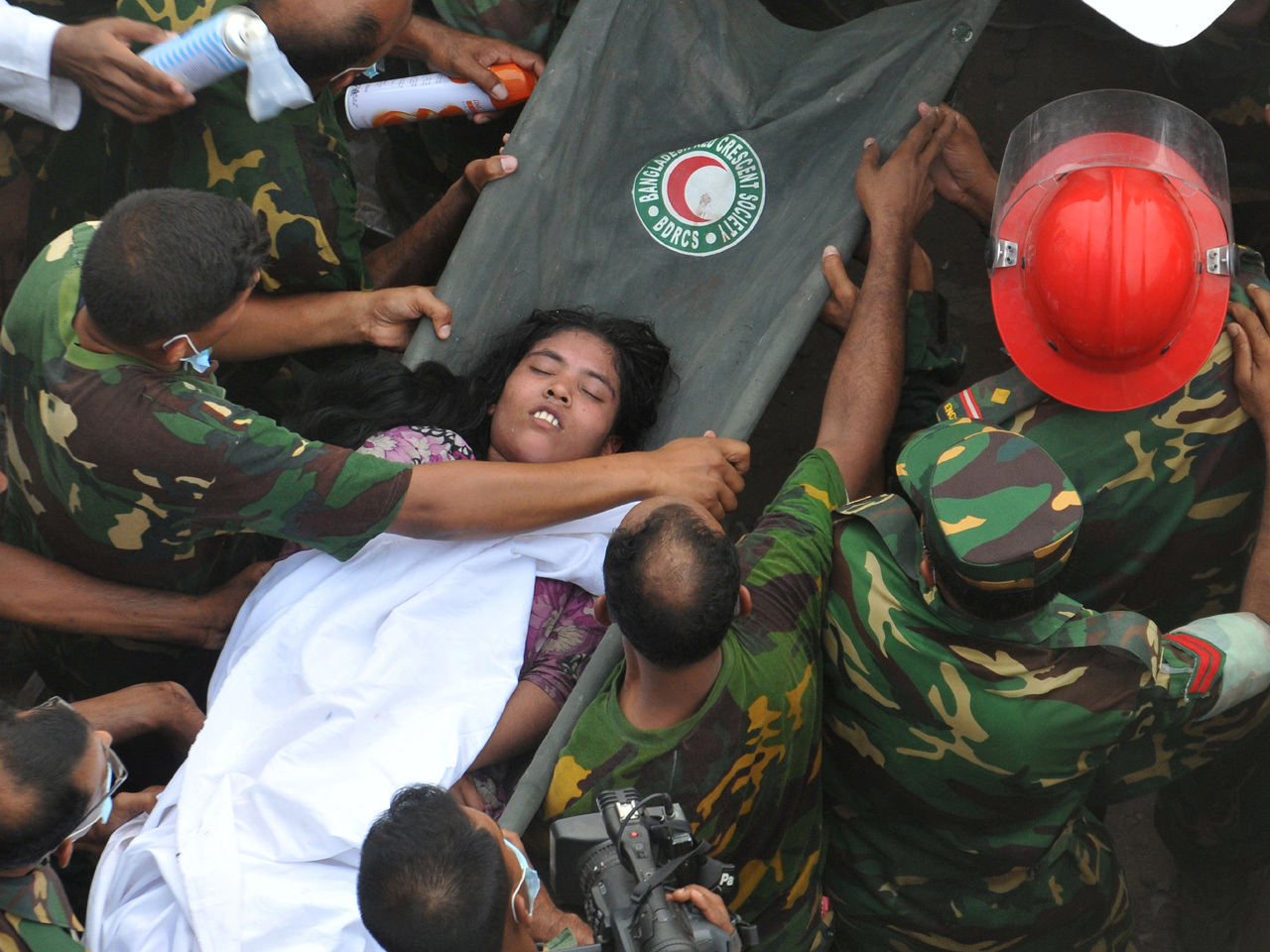 SAVAR, Bangladesh Two owners of garment factories in a Bangladesh building that collapsed into a pile of mangled metal and concrete have been arrested as public fury mounts over the accident that left at least 324 dead.

He told reporters that police had also detained the wife of Mohammed Sohel Rana, the owner of the collapsed building, for questioning. Authorities are still searching for Rana, who hasn't been seen publicly since the building collapsed. Police in Bangladesh often detain relatives of missing suspects as a way to pressure them to surrender.

Authorities said the death toll had climbed to 324, but that rescuers had pulled seven more survivors from the rubble early Saturday after they found more than 40 survivors inside the collapsed building late Friday.

The arrests came hours after Prime Minister Sheikh Hasina ordered police to arrest Sohel Rana and the owners of the garment factories based operating in the building.

Hasina made the order as protests spread over the latest accident to hit Bangladesh's massive, but poorly regulated, garment industry.

Wailing, angry relatives fought with police who held them back from the wrecked, eight-story Rana Plaza building, as search-and-rescue operations went on. Three of the floors had been illegally added.

Fire service inspector Shafiqul Islam, who searched the building, said more than 40 survivors were found late Friday. Through holes in the structure, he gave them water and juice packs to combat dehydration in the stifling heat and humidity.

"They are alive, they are trapped, but most of them are safe. We need to cut through debris and walls to bring them out," Islam said.

More dead were also discovered. Shamim Islam, a volunteer who entered the collapsed building along with rescue workers, said he saw "many bodies inside."

Search crews were cautiously using hammers, shovels and their bare hands. Many of the trapped workers were so badly hurt and weakened that they needed to be removed within a few hours, rescuers said.

Nearly 90 people have been rescued in the last day, as hundreds of rescuer workers crawl through the rubble amid the cries of the trapped and the wails of workers' relatives gathered outside the building.

A garment manufacturers' group said the factories in the building employed 3,122 workers, but it was not clear how many were inside it when it collapsed Wednesday in Savar, a suburb of Bangladesh's capital, Dhaka. Rescue officials say more than 2,400 have been rescued or escaped.

Police cordoned off the site, pushing back thousands of bystanders and relatives after rescue workers complained the crowds were hampering their work.

Clashes broke out between the relatives and police, who used batons to disperse them. Police said 50 people were injured in the skirmishes.

"We want to go inside the building and find our people now. They will die if we don't find them soon," said Shahinur Rahman, whose mother was missing.

Thousands of workers from the hundreds of garment factories across the Savar industrial zone and other nearby areas marched to protest the poor safety standards in Bangladesh. Local news reports said demonstrators smashed dozens of cars Friday, although most of the protests were largely peaceful.

Police say they ordered an evacuation of the building on Tuesday after cracks in Rana Plaza were found, but the factories ignored the order and were operating when it collapsed the next day. Video before the collapse shows cracks in walls, with apparent attempts at repair. It also shows columns missing chunks of concrete and police talking to building operators.

Officials said soon after the collapse that numerous construction regulations had been violated.

Rana, the building's owner, had been given a permit to erect a five-story building but had added another three stories illegally, said Abdul Halim, an official with Savar's engineering department. Police chief Mohammed Asaduzzaman said police and the government's Capital Development Authority have filed negligence cases against Rana.

Atiqul Islam, president of the Bangladesh Garment Manufacturers and Exporters Association, called on Rana and the factory owners to surrender during a meeting with the prime minister late Friday.

The disaster is the worst ever for the country's booming and powerful garment industry, surpassing a fire five months ago that killed 112 people and brought widespread pledges to improve worker-safety standards. Since then, very little has changed in Bangladesh, where low wages have made it a magnet for numerous global brands.

Bangladesh's garment industry was the third-largest in the world in 2011, after China and Italy, having grown rapidly in the past decade. The country's minimum wage is now the equivalent of about $38 a month.