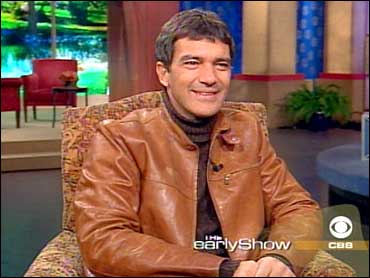 Antonio Banderas is riding his way back to the big screen in the new adventure "The Legend Of Zorro."

"Nobody will believe the feats I have done in the movie," Antonio Banderas told The Early Show co-anchor Rene Syler. "But it's not important. What is important is the character."

As in most of his action roles, Banderas insisted on doing many of his own stunts.

"There is a relative risk when you do movies like this," Banderas said. "Not so much with the horse. It was in the sword fighting, especially when you're working with 10 guys, sword fighting them at the same time. At 6 in the morning, people are sleeping in the corners of the stage and you're Zorro.

"But at the end, we came out alive. But what matters is the show is very beautiful. I think families will have a great time with the movie."

"The Legend Of Zorro" is set several years after the conclusion of the previous adventure, and there are a few reasons why it took seven years for the sequel.

"They actually want to be honest and have the possibility of doing something in the same parameters of quality that we did the first one," Banderas said. "To put everybody in front of the camera and behind the camera that was in the first one was not an easy thing. Plus, now the family is 10 years older, and we have a whole different approach to the character."

Alejandro (Banderas) and Elena (Catherine Zeta-Jones) are married and have a 10-year-old son, Joaquin (Adrian Alonso). Though Alejandro continues to don the mask of Zorro to protect the poor and oppressed residents of the California territory from the greed of the overlords, he is torn between his duty and his desire for a more normal life.

"In a way, she's having problems," Banderas said. "It happens sometimes. The movie is very contemporary, and we have the possibility of doing a lot of comedy with it."

It was his role as Zorro that allowed Banderas to make his mark on film audiences, becoming an international superstar in 1998. Now he has his star on the Hollywood Walk of Fame.

"That was actually a beautiful thing," he said. "It was beautiful for me and unbelievable for my father and my mother."

So, what's next for the star?

"I am in the production of my second movie as a director, a Spanish production with Spanish actors ("El Camino de los Ingleses"). Everything in Spanish, which helps a little bit," Banderas said. "I'm going to be there April-March, and then back here to make a couple of movies and probably come to New York, come to Broadway again."

Click on page 2 to track his career.
Fast Facts On Antonio Banderas

Where The Part-Time Holiday Jobs Are