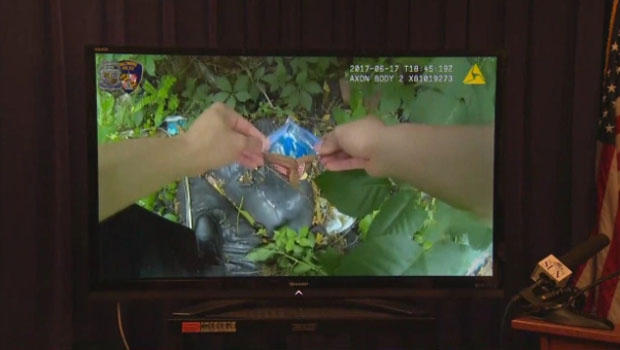 BALTIMORE -- Baltimore's police commissioner says there is nothing questionable about an officer recorded on a body camera apparently recovering evidence, then placing it back where he'd found it before turning on his body-worn camera.

Kevin Davis said at a news conference Thursday that he disagreed with state's attorney Marilyn Mosby's decision to drop charges in dozens of cases involving the officers seen in the video.

Prosecutors identified about 100 criminal cases that have been and or will be affected by the video. Forty-three of those cases were dropped, Mosby said.

"This one's certainly not planting evidence … it's not even a re-enactment," Davis said. "Our officer maintained care and custody of the evidence he recovered even when he momentarily put it back down to document with his camera where he recovered it from."

The officers involved reported the incident.

It's the third controversial Baltimore police video to be investigated in recent weeks, leading to dozens of cases being dropped or reviewed.

Mosby's office last month announced the dismissal of cases that relied on the testimony of one or more officers in another bodycam video from January. Defense attorneys said that video shows an officer planting drugs. On Monday, Mosby's office said the total number of cases to be dismissed linked to that video is 68.

Davis said in July police are investigating whether the officers in the January case "replaced drugs that they had already discovered to document the discovery with their body-worn cameras on."

Another video made in November shows an officer find a bag of alleged drugs shortly after another officer's unsuccessful search. In 44 cases linked to that video, prosecutors have either asked for more time to investigate, dropped the case or will drop the case if a delay is denied.

"The body-worn-camera program was established to fight crime, better protect officers, and foster public trust," Mosby said in a statement released Monday obtained by the Baltimore Sun. "Whether planting evidence, re-enacting the seizure of evidence or prematurely turning off the department-issued body-worn camera, those actions misrepresent the truth and undermine public trust."

Mosby's office did not immediately respond to requests from the paper for reaction to Davis' latest comments.