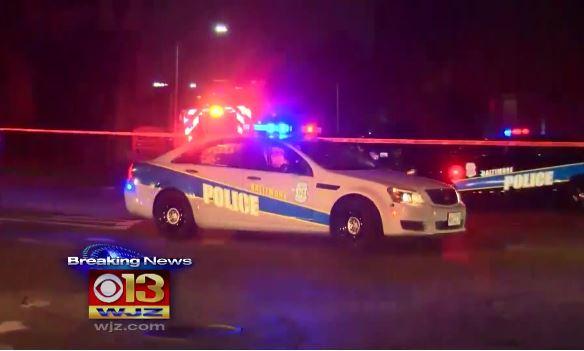 BALTIMORE -- A 43-year-old Baltimore Police homicide detective has died after being shot in the head in west Baltimore Wednesday night, officials announced Thursday.

Detective Sean Suiter was a father of five and an 18-year veteran of the force, according to Baltimore Police Commissioner Kevin Davis.

Davis said a manhunt was underway for a "heartless, ruthless, soulless killer" who shot the detective who was "just doing his job," working in a troubled area of the city grappling with high crime rates.

Federal agencies were offering a $69,000 reward for information leading to the gunman's arrest.

Police cordoned off streets in the West Baltimore area and a tactical unit combed alleyways searching for a shooter. Numerous cruisers responded and a police helicopter buzzed overhead, illuminating streets below with a searchlight. The neighborhood has a number of vacant row houses.

Doctors at the University of Maryland Medical Center's Shock Trauma Center said the officer was on life support in the intensive care unit before his death.

Wednesday's shooting of the police officer comes amid a particularly violent period in Baltimore: So far this year, the city of roughly 620,000 inhabitants has seen more than 300 homicides.

Mayor Catherine Pugh called for a halt to the violence - a frequently repeated refrain in Baltimore.

"We are praying for peace in our streets. And I can say to you all again and again: Enough is enough. Crime has to come to an end in this city. This kind of violence cannot be tolerated," she said.