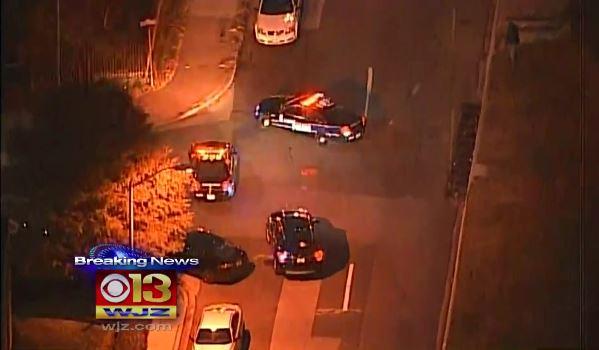 EDITOR'S NOTE: The homicide detective has since died. Read the latest story here.

BALTIMORE -- A homicide detective with the Baltimore police force was shot in the head Wednesday while working in a troubled area of the city grappling with high crime rates.

Outside the hospital where the gravely wounded 18-year veteran was fighting for his life, Police Commissioner Kevin Davis said a manhunt was underway for a "cold, callous killer" who shot the detective who was "just doing his job."

Federal agencies were offering a $60,000 reward for information leading to the gunman's arrest. The officer wasn't identified, but Davis said he has a wife and two children.

"This is a dangerous profession. This is a dangerous job. Police officers know that at any given time they could confront someone who wants to do them harm, and that's exactly what happened tonight," Davis said, adding that it would be a "long night" for investigators seeking "every bit of evidence."

Police cordoned off streets in the West Baltimore area and a tactical unit combed alleyways searching for a shooter. Numerous cruisers responded and a police helicopter buzzed overhead, illuminating streets below with a searchlight. The neighborhood has a number of vacant row houses.

CBS Baltimore reports that the injured officer was investigating a murder in the troubled Harlem Park neighborhood with a partner when he confronted a man who then opened fire.

Resident Rick Johnson told CBS Baltimore that he was nearby when the gunfire erupted.

"We are doing everything we can to keep him stabilized and to take care of the injury to his brain," he said, flanked by Davis and Mayor Catherine Pugh.

Wednesday's shooting of the police officer comes amid a particularly violent period in Baltimore: So far this year, the city of roughly 620,000 inhabitants has seen more than 300 homicides.

Pugh called for a halt to the violence -- a frequently repeated refrain in Baltimore.

"We are praying for peace in our streets. And I can say to you all again and again: Enough is enough. Crime has to come to an end in this city. This kind of violence cannot be tolerated," she said.