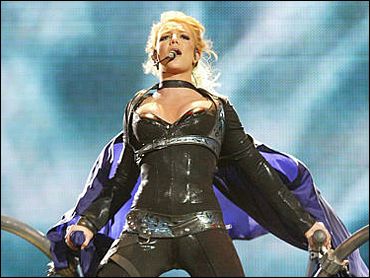 Pop princess Britney Spears injured her knee during a video shoot and was hospitalized for arthroscopic surgery, her record label said Wednesday.

Spears, 22, was taken to a hospital after hurting herself late Tuesday, Jive Records said in a statement. An MRI showed floating cartilage in her knee.

The injury occurred after Spears completed outdoor scenes for the video of her new single, "Outrageous," with rapper Snoop Dogg in the New York City borough of Queens. Spears was doing choreography when her knee gave out, Jive said.

"Outrageous" will be featured in the movie "Catwoman," due out next month.

Spears is scheduled to begin a North American tour June 22 in Hartford, Conn., according to her Web site. Her latest album, "In the Zone," was released in November.

Spears was forced to cancel two shows in March because of a knee injury.