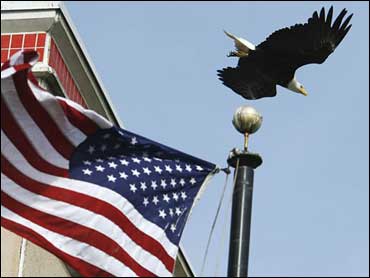 The government took the American bald eagle off the endangered species list Thursday — an official act of name-dropping that President Bush hailed as "a wonderful way" to celebrate the Fourth of July.

Mr. Bush said the bald eagle's resurgence after a four-decade-long fight should be credited to cooperation between private landowners and federal and state governments. "This great conservation achievement means more and more Americans across the nation will enjoy the thrill of seeing bald eagles soar," he said.

Interior Secretary Dirk Kempthorne, making the formal announcement at the Jefferson Memorial, said: "Today I am proud to announce the eagle has returned."

His department made the recovery official by removing the eagle from the list of threatened species under the Endangered Species Act. The bird had been reclassified from endangered to threatened in 1995.

There are now nearly 10,000 mating pairs of bald eagles in the contiguous 48 states, compared to a documented 417 in 1963 when the bird was on the verge of extinction everywhere except in Alaska and Canada where it has continued to thrive.

Soaring over concrete and pavement, the bald eagles nesting in Philadelphia this year may provide the best evidence of all that America's bird is back, reports CBS News correspondent John Blackstone. It's the first time in 200 years there are real Philadelphia eagles.

"After years of careful study, public comment and planning, the Department of Interior and the U.S. Fish and Wildlife Service are confident in the future security of the American bald eagle," said Kempthorne.

He promised that "from this point forward we will work to ensure that the eagle never again needs the protection of the Endangered Species Act."

The eagle, whose decline came during years in which the bird was often targeted by hunters, will still be protected by state statutes and a federal law passed by Congress in 1940 that makes it illegal to kill a bald eagle.

The U.S. Fish and Wildlife Service is developing guidelines on how that law will be implemented. It also is developing a permitting system to allow landowners to develop their property and still protect the eagle population.

A federal judge in Minnesota last year ordered the eagle removed from the list unless the government could prove further delays were necessary. The order came in a lawsuit brought by Pacific Legal Foundation on behalf of a Minnesota landowner who wants to develop property with an active bald eagle nest.

"I wouldn't do it again if I knew then what I know now. It weighs on me and it will continue to weigh on me until everyone is 100% better," the event organizer said.

The former president said the rhetoric could turn off new people, rather than convince them to be a part of it.