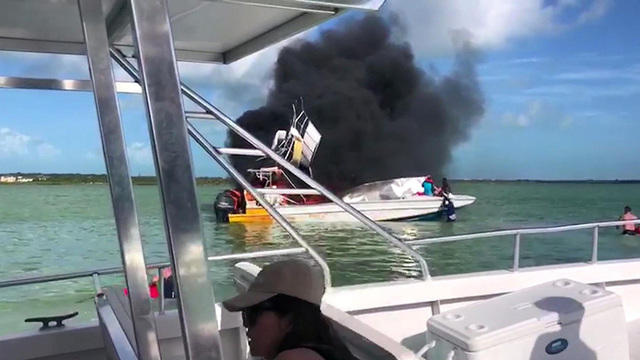 Authorities are trying to determine what caused a boat explosion in the Bahamas that left an American tourist dead and nine others injured. Four Americans who survived the incident were flown to Tampa, Florida, for treatment.

The blast ripped through the boat carrying 10 American sightseers Saturday, shortly after it set off from the Island of Exuma. The blast sent a column of black smoke billowing into the blue Bahamian sky.

With the ship engulfed in flames, panicked passengers on another tour boat begged their captain to pull away. Others jumped into the water and swam toward the burning ship, bringing the injured on board. this man appeared to be bleeding from the back of his head.

A local legislator told CBS News that 12 people were on the disabled vessel Saturday morning: 10 American passengers and 2 Bahamian crew members. Some were seen being carried back onto dry land on makeshift gurneys.

Christian Topperwien, a German television host, said he helped with the rescue.

"We had to transport them with wood panels from the boat to the land and then on a pickup truck. I actually expected at least like a helicopter or an ambulance, but there was nothing," he said in a video recording.

The U.S. Coast Guard flew four survivors to Florida. Five remain in the Bahamas and were transported more than 100 miles to a hospital in the capital of Nassau, where one passenger had her legs amputated, a family relative said.

Topperwien said the boats were taking vacationers to see the Bahamas' famous swimming pigs. He said he and his wife would have been on the destroyed ship had they not switched to a longer tour at the last minute.

Officials with the country's police, fire and civil aviation departments are conducting an investigation into the explosion, Shanta Knowles, superintendent of police for the Royal Bahamas Police Force, told the Associated Press.

Michelle Miller contributed to this report.