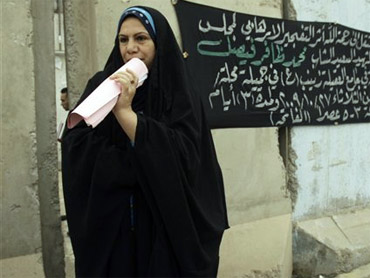 Sadiya Khadem Rashid just needed a stamp. One stamp from Baghdad's city hall so she could receive $850 in compensation given to displaced Iraqis who return home. But before she could get there, the building was blown up.

Recent bombings that hit government buildings in downtown Baghdad killed more than 250 people and wounded hundreds more. The blasts also had a wider effect: slowing down the government services Iraqis use on a daily basis.

The bureaucratic snarl adds to the blow that the attacks inflicted on public confidence in Prime Minister Nouri al-Maliki ahead of national elections in January. Infuriated Iraqis have wondered how the blasts could happen in what was supposed to be one of Baghdad's safest neighborhoods.

While other bombings have targeted locations such as mosques or restaurants, these explosions targeted the heart of the government: the Foreign and Finance Ministries in August, and the Justice Ministry, the Baghdad Provincial Administration and the Ministry of Municipalities and Public Works in October.

Weeks after the Oct. 25 blasts, the Baghdad administration building, akin to a city hall, is still almost uninhabitable. Some employees work out of rooms in the far back of the building away from the street, which was the least affected by the blast, but closer to the street, there are no phones, no floors and no walls.

A mound of mangled concrete and broken glass is piled up in the intersection between the Justice and Municipalities Ministries. A long Iraqi flag hangs down the face of the Justice Ministry, partially covering the blown out walls and windows.

At the Foreign Ministry, employees have begun to move back into some offices even as construction crews noisily work to rebuild the walls, windows, ventilation and elevators damaged in the blast. Out in the parking lot, dust-covered desks and coffee tables and ripped office chairs from the gutted building are piled up.

Rashid put off her attempt to finish her compensation paperwork until a week after the bombing. Amid the destruction, she appealed to a security guard, showing him her pink folder full of documents and asking him where she should go.

(AP Photo/Hadi Mizban)
(In this photo taken Wednesday, Nov. 4, 2009, a big crater is seen in the middle of two destroyed government buildings.)

Rashid's family was forced by sectarian fighting to leave their home in Youssifiyah, 12 miles south of Baghdad. Now she seeks the compensation that al-Maliki's government has offered to each returning family in hopes of reversing the exodus caused by years of vicious Sunni-Shiite violence.

"We returned to our house because the government said it was safe," Rashid told The Associated Press. "We need the money to rebuild and eat."

But no one was in to help her at the administrative building.

"Everything was blown to pieces," Saad Mehdi, another security officer, who was inside the building when it was bombed. "We come to work but we don't do any work."

Navigating bureaucracy can be a lengthy process in Iraq, where many government records are kept by hand and not computer. People often have to go from office to office to find the right person to sign off on their request and provide the all-important stamp required to validate a decision.

During a recent tour of the Foreign Ministry, Iraq's chief diplomat Hoshyar Zebari said 43 employees were killed and more than 500 of the ministry's 1,200 staff were injured. Pictures of the slain employees hang in the lobby. More than 20 employees of both the provincial administration and the Justice Ministry were killed, officials said.

"The emotional damage is huge," said Abdullah Jabar, a director of the Justice Ministry's Budget Department. "We can work in the destroyed building, no problem, but we can not bring back those who died here."

Sinan Hussein Abdullah, who works at the court in the Justice Ministry, was in his office when the blast brought the ceiling down on top of him and showered him with broken glass.

With a fractured arm strapped to his chest and bandages on his nose and forehead, he now works feverishly in the piles of rubble to minimize the backlog in cases, which are building up because the courtroom was destroyed.

"It's our duty to stand defiant against destruction," he said.

One area where there will be no slowdown, ministry officials say, is the handover of prisoners from U.S. to Iraqi custody. The Americans are scheduled to transfer all the prisoners in its custody - currently about 9,000 - by year's end.

The Iraqis must decide whether to free them for lack of evidence or press charges. Ibrahim said the reviewing process is continuing despite the bombings. The U.S. government has promised to help the ministry in the wake of the bombing with supplies including office furniture, computers, four armored cars and 20 SUVs, he said.

Ibrahim said the people who bombed his building and others are trying to undermine the whole government.

"If they want to rule, they should run in the elections," he said.