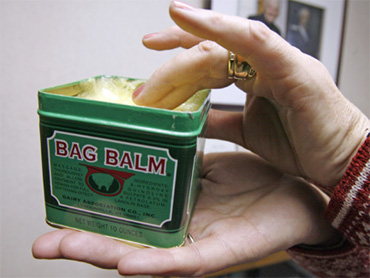 Winter is most definitely here. It must be. The phones are ringing at Bag Balm headquarters.

Everyone wants a new tub of the gooey, yellow-green ointment. And all have a story about its problem-salving - they use it on squeaky bed springs, psoriasis, dry facial skin, cracked fingers, burns, zits, diaper rash, saddle sores, sunburn, pruned trees, rifles, shell casings, bed sores and radiation burns.

Everything, it seems, except for cows.

"Some, you don't really even want to hear, but they're gonna tell you anyway," said accounts manager Krystina McMorrow, who is half the office staff.

"I've been here 14 years," said accounts-receivable clerk Shawna Wilkerson, the other half. "The oddest one I've heard was somebody who reloads his ammunition. He puts Bag Balm on the bullet casing and it makes it easier to reload 'em."

Developed in 1899 to soothe the irritated udders of milking cows, the substance with the mild medicinal odor has evolved into a medicine chest must-have, with as many uses as Elmer's glue.

According to Bag Balm lore, the stuff went from barns to bedrooms when dairy farmers' wives noticed how smooth their spouses' fingers were after using it on cows' udders. The wives were jealous.

Bag Balm went to the North Pole with Admiral Byrd, to Allied troops in World War II, who used it to keep weapons from corroding, to Ground Zero for the paws of cadaver-sniffing dogs searching the World Trade Center rubble, and to troops in Iraq and Afghanistan.

Sold off pet care shelves and at farm stores for $8.99 per 10-oz. green tub (with cow's head on the lid), it's made of petrolatum, lanolin and an antiseptic, 8-hydroxyquinoline sulfate - substantially the same formula used since John L. Norris bought it from a Wells River druggist before the turn of the century.

It is made in a one-room "plant" by the family owned Dairy Association Co., Inc. - six employees, two officers and no sales force - operating in a cluster of converted railroad buildings in this small (pop. 1,215) northern Vermont town.

Petrolatum is shoveled from 50-gallon drums into a large vat and blended with lanolin from Uruguay, then heated to 95 degrees. A machine quickly squirts the goop into metal cans that are cooled, capped and packaged.

The plant is inspected annually by the U.S. Food and Drug Administration, though the product is marketed for use by animals, not humans.

Distributed by wholesalers and sold retail in farm stores, national drugstore chains and general stores, its popularity has grown largely with word-of-mouth advertising as converts becomes users and then devotees.

Imitators through the years have included Udderly Smooth Udder Cream and Udder Balm.

"The colder the weather, the better our business," said Ron Bean, production manager at the plant, which is open for tours but not photographers.

To call the operation old-fashioned is an understatement.

The plant operates with one shift, Monday through Friday. The Dairy Association doesn't take credit cards ("Send us a good ol' check," says Allen). And the names of individual stores that buy directly are kept on index cards in file cabinets.

Long-distance bicyclist Andy Claflin says he started using Bag Balm on a cross-country race last June, when a teammate turned him on to it for saddle sores.

Claflin, 37, from Dayton, Minn., was suffering from saddle sores as he competed in the Race Across America. A teammate told him it was good for the sores, a bane of long-distance biking. So he slathered some on, down below.

"I was sitting there in Arizona, it's 110 degrees, the air conditioning wasn't working, the crapper in the RV wasn't working, I gotta' bike 100 miles in this heat and great, I've got to deal with this," he said. "It was nasty and filthy and it felt weird ... But I didn't have saddle sores from then on, riding 130 miles a day. When you're on the bike, you're like 'Oh, this stuff is great."'

Marge Boyle, 62, a quilter in Paducah, Ky., keeps a tin by her sewing machine.

"It's really a wonderful product when you're sewing, because of all the pinpricks you get. It soothes and heals your fingers. Quilters are always pricking their fingers. We wash our hands constantly to keep them free of dirt, and you need something to soothe them," she said.

And it's still de rigeur in barns, where it all started.

Dairy farmer Willie Ryan has used it since the '70s, to soothe the chapped teats of cows. And more.

"The cows get frostbit sometime, so we use the Bag Balm," said Ryan, 60, of Craftsbury, Vt. "Any open wound with swelling, you just put some of that in and put a pack bandage on it and it does wonders. Don't ask me how, but it does," he said.

For all its myriad uses, there's one place its makers say never to use it.

"Never put Bag Balm in your hair, because you will not get it out," said Wilkerson.