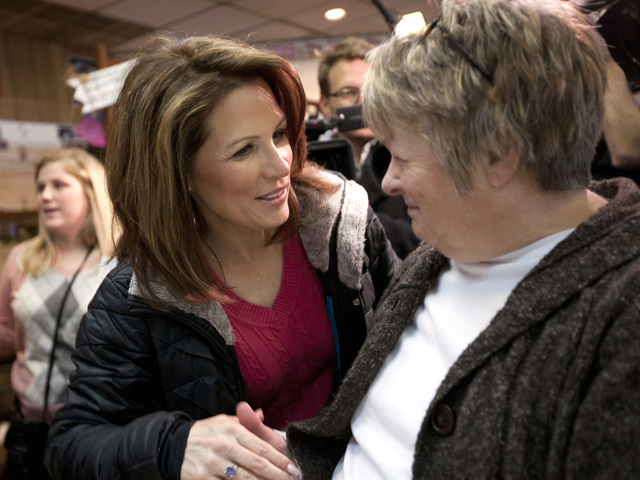 WINTERSET, Iowa - Rep. Michele Bachmann said Wednesday that no one has urged her to drop out of the presidential race, even as led two politically active Iowa pastors said an effort has been under way to persuade either her or Rick Santorum or Michele Bachmann to consider doing so.

The two pastors -- the Rev. Cary Gordon of Sioux City and the Rev. Albert Calloway of Indianola, both influential figures among the state's evangelicals -- reportedly said they have asked Santorum to consider quitting, and that they fear the two GOP candidates would split the evangelical vote. But Santorum surged into third place in a new CNN/Time/ORC poll, making the possibility of his departure extremely unlikely.

Bachmann said neither pastor has approached her and that she has no intention of dropping out. The CNN poll showed her with just 9 percent of the vote in Iowa, trailing all other candidates except Jon Huntsman, who has devoted nearly all of his time to campaigning in New Hampshire.

"There is no candidate that has a greater level of evangelical support across the state," said Bachmann, whose support has plummeted since she won the Iowa straw poll in August.

She added, "We have a strong groundswell of support and what we've seen in this 99-county tour is nothing short of a miracle. It's like a light switch was flipped on. So I think a lot of people are going to be shocked on January 3rd, and we are delighted with the support we are receiving."

In a subsequent appearance on Fox News, Bachmann said she's banking on support from voters who have not yet made up their minds. "Everything is so flux right now - about half of Iowans are completely undecided," she said.