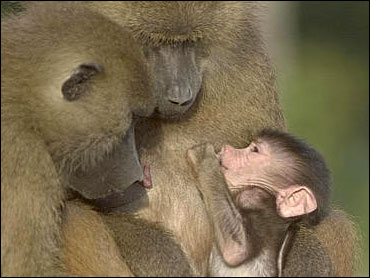 Among baboons, moms with lots of female friends are the most successful parents, according to a new study that supports the idea that social support is an essential part of being a baboon — or a human.

The study, appearing this week in the journal Science, found that baboon mothers who formed networks of female friends were about a third more successful at raising their young than were females who spent more time alone or isolated.

"We don't know how sociability helps females, but we do know that social females do better at raising their young," said Susan C. Alberts, a Duke University researcher and co-author of the study. "It suggests that social bonds are an important part of being primates."

Joan B. Silk, a UCLA professor and first author of the study, said the researchers analyzed how 108 females in wild groups of baboons in Kenya spent their time and how this might affect their motherhood.

The baboons socialize by staying close together, grooming each other's fur and forming tight coalitions against outside threats, either from predators or from other bands of baboons. All of this helps build a tight relationship network among the social females.

"They are spending a lot of time and a lot trouble in maintaining their social contacts," Silk said of the female baboons. "They spend 10 percent of their day grooming others and that is a big chunk of time for animals living in the wild."

But it pays off in reproductive success, she said.

Most deaths among young baboons occur during the first year, so if an infant reached that birthday the researchers counted it as a reproduction success.

Silk said the finding is the first in lower primates to demonstrate that a big investment in building social contacts can significantly improve child-rearing success.

"There is a parallel in humans that is intriguing," she said. "We know that in humans having a social network has a very positive health outcome."

Since the study shows that social networking is also a positive for baboons, Silk said it strongly suggests that evolution has favored primates that are sociable and able to work cooperatively.

"These findings and the findings in humans tell us that social contact is fundamental to surviving as a primate," she said.

The conclusions are based on 16 years of almost daily observations in which researchers gathered behavioral data and kept up with the lives and deaths of members of two baboon tribes near the foot of Mount Kilimanjaro in Kenya.

Alberts and the third co-author, Jeanne Altmann, both have appointments with the National Museums of Kenya. Altmann is also with the Brookfield Zoo in Brookfield, Ill.