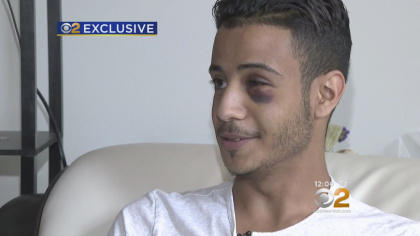 NEW YORK -- A Bronx deli worker injured in a brutal assault with avocados and bananas last month is speaking out for the first time exclusively to CBS New York.

Amr Alzabidi still has a dark and swollen eye, but that only begins to tell of the terror and brutality he endured in the attack, which was caught on surveillance video. He was one of two workers behind the counter at the Stadium Gourmet Deli on 161st Street in the Concourse section of the Bronx borough in New York City on May 29.

Video shows the workers cower and shield their faces as two suspects allegedly grabbed from a pile of unripe avocados and started pelting them with the produce, all due to a mixed-up food order.

Alzabidi was hit so hard his jaw was broken and face fractured.

"It's as horrible as it could be," Alzabidi told CBS New York.

Alzabidi said the two suspects came in with four others and tried to order food from an employee who didn't speak English and was deaf in one ear.

Alzabidi says he tried to explain that to the men and assist with their order, but that things got ugly and tempers flared. Alzabidi said he called 911 and asked the men to leave and they did, and then two returned.

"I was trying to help them and the guy felt I was being sarcastic for some reason," Alzabidi said.

That's when the men started hurling avocados and bananas at Alzabidi. Alzabidi can be seen on the surveillance video, though his face is blurred, trying to cover up and protect himself. That's the last thing he remembers.

"I was just knocked out," Alzabidi said. "I was out of consciousness."

Alzabidi was badly injured; he suffered a fractured orbital socket that left him blind in his left eye for a week. He now has blurred vision, which he says may be an issue for the rest of his life.

"It's horrible. It's a crime," Alzabidi said.

The NYPD are questioning Brad Gomez, 28. He faces assault charges.

Sources say Gomez was going to turn himself in at 9 a.m. but did not. Instead he was picked at his residence on Gerard Avenue. He is now being questioned.

Gomez had nothing to say to reporters when he arrived at the 44th precinct.

The other suspect is still out there.