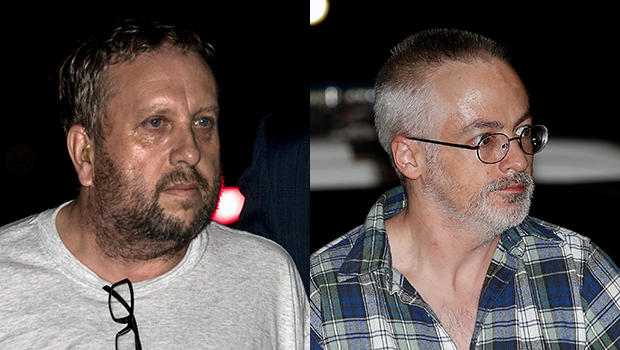 CHICAGO -- Two employees of elite universities charged in the fatal stabbing of a 26-year-old hair stylist were returned to Chicago early Saturday to face charges of first-degree murder in the brutal killing as officials released results of an autopsy on the victim.

The men are accused of killing Trenton James Cornell-Duranleau, a Michigan native who had been living in Chicago, last month in Lathem's high-rise Chicago condo. They may appear in court in Chicago as early as Saturday.

Chicago police have said Cornell-Duranleau suffered more than 40 stab wounds, including "mutilations," to his upper body. Authorities say the attack was so violent the blade of the knife they believe was used was broken.

They found Cornell-Duranleau's body July 27 after the building's front desk received an anonymous call that a crime had occurred on the 10th floor. He had been dead more than 12 hours. By then, authorities say Lathem and Warren had fled the city.

According to autopsy results released Friday by the Cook County medical examiner's office, Cornell-Duranleau had methamphetamine in his system at the time of his death.

Police say Lathem and Cornell-Duranleau, who moved to Chicago about a year ago, had a personal relationship, though they have not described the nature of it or a motive for the attack.

It's unclear what the relationship was between Lathem, Cornell-Duranleau and Warren, who's British. He arrived in the U.S. three days before the killing, after being reported missing in Great Britain.

Lathem, a microbiologist who's been on Northwestern's faculty since 2007 but was not teaching at the time of the attack, was terminated by the university for fleeing from police when there was an arrest warrant out for him.

Investigators said at some point after the killing, Lathem sent a video to friends and relatives apologizing for his involvement in the crime, which he called the "biggest mistake of my life." The video raised concern among investigators that Lathem might kill himself.

Lathem and Warren both appeared in court in California last week, where they agreed to return to Illinois to face charges.

An attorney for Lathem, Kenneth H. Wine, called him a "gentle soul" and said "what he is accused of is totally contrary to the way he has lived his entire life." Wine said Lathem intends to plead not guilty to the charges.

Warren was represented by a public defender during a brief appearance in a San Francisco court. She said he is "presumed innocent," but declined to comment further.