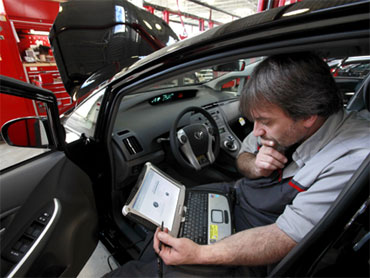 "Many parts communicate with each other," said the engineer, who offered the example of braking: In the past, when a driver wanted to brake, only the braking system was acting. With many of today's hybrid vehicles, for instance, when the brake pedal is pressed, the motor is also given commands, via a computer system.

This new and growing level of interdependence under the hood necessitates far greater synergy among the various manufacturers of the individual components systems, explained the insider, who asked not to be identified because he still holds a senior role in the industry.

Much more extensive compatibility testing and coordination during the development phase is a byproduct of the rising reliance on electronics.

"Hardware problems are easier to prevent," he said, "electrical ones are more of a problem" because their root cause is often difficult, if not impossible to predict or prevent.

That means greater pressure on the engineers designing the parts and the vehicles. The problem, as the industry insider put it succinctly to CBSNews.com: "Engineers are not gods."

Pressure comes from every angle, he said; to design greener cars, to make them more cost efficient to build, to do it all faster than the competition — and to make sure the end result is safe to drive.

"Of course, safety is a first priority," said the Japanese engineer, but people make mistakes, and that, combined with the elusive nature of electronic and software glitches is at the root of the problem facing the auto industry.

"The risk becomes greater," he said, acknowledging that, along with the increasing interdependence — both in the cars themselves, and among the automakers and parts makers — "I have seen problems."

"All automakers face this situation. We should be more careful."

And they are. The insider told CBSNews.com that most, if not all, of the world's big auto companies are learning Toyota's lesson and taking a fresh look at quality control measures.

"They will emphasize that more than in the past."