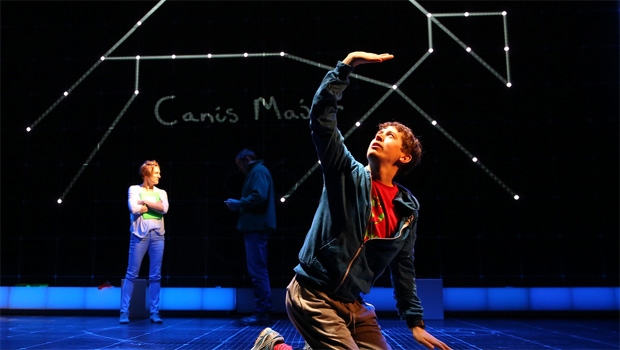 "My name is Christopher John Francis Boone. I know all the countries of the world and their capital cities and every prime number up to 7,057."

The hit of the season on Broadway is an explosion of sights and sounds that may make you see the world differently. It's called "The Curious Incident of the Dog in the Night-Time," about a 15-year-old autistic boy named Christopher Boone, played by 25-year-old Alex Sharp.

" It must be exhausting," Pauley said.

" Yeah, it is, it is. But it all makes so much sense. Every day, walking down the street and there are tons of people around me -- just wanna, like, crouch down and start groaning!" he laughed. "I feel like that all the time in my real life."

"It feels like an exaggeration of qualities that I think a lot of people already have," said Sharp.

The play is based on a best-selling novel by Mark Haddon.

"Christopher describes himself as a young mathematician with some behavioral difficulties," said Haddon. "He's very talented, in his own way, but he has huge social problems."

Haddon resists labeling Christopher as autistic. "That puts him in a box. And as soon as you stick a label on him, you say, 'He's not like me, he's like somebody else.' People are so incredibly different in so many ways. It seems such a tragedy to sort of give you all a point score between A and B."


In fact, high-functioning people on the autism spectrum, like teenagers at the Hill Top Preparatory School in Philadelphia, are often extremely intelligent.

Christian Klinefelter is 16 and musically-inclined. "But I really like math, too, though."

And yet, as it does for the play's protagonist, life presents many challenges.

David Heller, 18, says, "I've heard people say my IQ's higher than my brother. Then I think about, 'Then why is he more successful than me?'"

They've all read "The Curious Incident of the Dog in the Night-Time," and identify with the character Christopher Boone.

"I loved the book, I could not stop reading it," said Callie Daughn-Wood, who introduced the book to her English class. "Everyone's really socially awkward at some point. So they just connected to that."

Christian described the character: "He feels more secure about math and logic things, and tries to steer clear of people."

Like many people with autism, Christopher finds people perplexing, but loves dogs, and his pet rat, Toby.

"I could touch animals for days," said Callie, "but I will, like, hate human touch a lot."

"With most things, I have a short attention span," David told Pauley. "But with fishing, I can do it for so long, be very patient, and I don't get bored or anything."

" I could probably use some of that," said Christian.

There are more questions than answers about autism. Why, for example, are autism diagnoses increasing so dramatically? In the United States, one of 68 children is diagnosed as "on the spectrum." Among boys, it's one out of 42.

At MIT's McGovern Institute for Brain Research, in Cambridge, Mass., neuroscientist John Gabrieli has made some intriguing discoveries.

"We had teenagers with and without autism in an MRI scanner," said Gabrieli. "And while they were in there, they saw two kinds of faces -- either faces that were looking directly at them, as if they were quite interested in what they were thinking about; or faces whose gaze was averted; they were looking away."

In typical teenagers, there was lots of activity in the back of the brain when they were shown the face that was looking away.

"We think that's a bit of social cognition," said Gabrieli, "trying to think, 'Why is this person not looking at me. They should be looking at me. Is there something dangerous going on there? Do they not like me?'"

But when autistic teenagers look at the same faces, there appears to be almost no activity - no differential sensitivity to social cues.

"In fact, there's almost nothing going on there at all," said Pauley.

"Well, actually, the way we do this kind of research, there could be a lot going on, but we don't know what it is."

Advanced brain imaging may explain some common autistic behaviors, such as an aversion to human touch, which Hill Top student Paula Murphy knows well: "Let's say my mom has a friend that I do not know and she hugs me. I'm like 'OK,' so I'll hug her back, because that's what I'm supposed to do, that's social manners. But I would just feel awkward the entire hug."

The students discussed how, in "Curious Incident," Christopher (who doesn't like to touch people) touched his parents. "With his fingertips," said Paula.

Demonstrating it to Pauley, Christian and David deemed it "weird" and "awkward."

Awkward and weird, maybe, but not (according to these students) as weird as shaking hands.

Pauley asked, "Do you understand why people do it?"

"I have no clue," said Christian.

"They could've made up some random hand movement!" added Calliem, waving her hands around. "And that could have been Hello."

"You find touching awkward, but this [waving hands around] is OK?" laughed Christian.

Last month, Callie, Paula, David, Christian and some of their classmates stepped off a bus and into the crazy, busy world of New York City's Times Square.

"When we first came here, I had, like, total sensory overload, but now it's totally awesome," said one girl.

They came to see "The Curious Incident," and afterwards got a chance to meet the star, Alex Sharp -- and even, curiously, to shake his hand.

Elliot told the actor, "May I say you did a fantastic job portraying Christopher as a young man with atypical autism, maybe even slight Asperger's. As someone who struggles with that, and some of my peers, great job. Honestly, absolutely great job!"

"Feeling like I'm being a representative of some kind, kind of blows my mind and is terrifying," Sharp told Pauley. "But it's also sort of a beautiful responsibility."

For Sharp, it's the kind of review that means more than the standing ovation he gets almost every night.