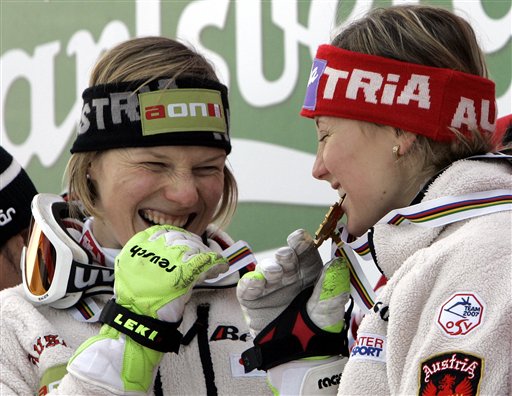 Austria won the team competition title Sunday and finished with the most medals at the world championships. Sweden was second and Switzerland third in the team event. The United States, without injured Bode Miller and other top skiers, finished last of the 11 teams.

"It's tough going into that knowing we're a second-rate team," U.S. ski star Ted Ligety said. "It's tough ... getting psyched up and think you have a chance at a medal when you don't have the members on the team that win World Cups."

Lindsey Kildow and Julia Mancuso, the only Americans to win medals at the worlds this year, also missed the team event. Kildow was injured in slalom training while Mancuso was exhausted and left early

"We're a little bit bruised up and I think we could use some rest before the next races," U.S. Alpine director Jesse Hunt said.

The Austrians flew in super-G silver medalist Fritz Strobl to strengthen their chances in the team event.

"Austria is the No. 1 ski nation and because of this, winning the team event was our big goal," said Renate Goetschl, who took bronze in last week's super-G. "At the Bormio worlds we weren't able to do it so now we had our revenge."

Eleven teams of six skiers were in Sunday's event. Two men and two women raced one super-G each in the morning, and four raced in the afternoon's slalom legs.

Austria won with 18 points, while Sweden had 33 and Switzerland had 39. A complicated points ranking system determined the winning nation after the total of eight runs for each team.

Strobl had returned home but flew back at the request of Austrian ski federation president Peter Schroeksnadel. Schroeksnadel left Are a few hours before the team competition, but not before making his feelings known.

Austria took the lead in the opening heat and stayed there for the entire competition.

Goetschl, Strobl and Michaela Kirchgasser gave Austria a hefty lead by posting the fastest time in each of their runs. Though Benjamin Raich was only a second behind Marc Berthod of Switzerland in the final super-G leg, Austria remained in the lead with five points.

When Marlies Schild posted the fastest time in the day's next-to-last slalom run, the Austrians had a big enough lead to lock up the title early _ even before newly crowned slalom champion Mario Matt came down.

"I went out to celebrate last night," said Matt, who won Saturday's slalom. "Because of the team event I went home early. But it turns out I could have stayed out late since my run was pointless."

The Swiss were tied for second with Sweden heading into the final heat, but had to settle for bronze after Berthod swerved off course.

The U.S. was 10th after the super-G. It dropped into last place after the opening slalom run and finished the day last with 77 points, setting a new mark for the lowest points total in a team competition.

The Americans started badly with their first three skiers _ Kaylin Richardson, Ligety and Resi Stiegler _ all skiing off course in the super-G. Tim Jitloff was the only American to contribute significantly, posting the fourth-fastest time in the final speed leg.

"I don't think anybody is a big fan of the team event. It's just another day added on," Ligety said. "Once I went out in my first run, I checked out, you know. It's like, the world championships are really over in essence."

In the slalom, Richardson made a costly mistake and finished last in her heat, while Stiegler fell twice. Ligety crashed in the final leg.

"It was just a tough day for us resultwise. It's a tough way to end it," Hunt said.

Miller skipped the team competition after injuring hiknee in the opening leg of Saturday's slalom. The speed racers had already left Are to prepare for the next World Cup competition in Garmisch-Partenkirchen, Germany.

Though the team competition event has proved a hit, many nations don't like it, saying it is too complicated for spectators to understand, too late in the championships and too team-oriented in a highly individual sport. It is expected to be held in the middle of the next championship.

Austria won the team event at the World Cup finals last season, and the Germans were the surprise champions at the last worlds in Bormio, Italy, in 2005.