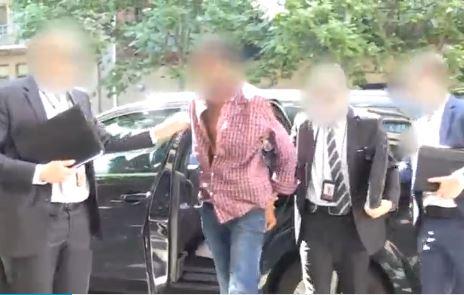 Thousands of revelers pack the square each year on New Year's Eve.

Ali downloaded instructions from an al Qaeda in the Arabian Peninsula website on how to launch a terrorist attack and how to use guns, Patton said.

Patton described Ali as "a person who's expressed an intention to try and kill as many people as he could through shooting them."

He said authorities have eliminated the threat of the attack, saying "the risk that was posed by this person has been removed."

Justice Minister Michael Keenan said police arrested four extremists last December over a similar plot to attack Federal Square and other public places in Melbourne over the Christmas-New Year period. The four will stand trial next year on terrorism charges.

Keenan urged the public to continue with their usual routines over the period and expect to see a heavy police presence.

"The aim of these terrorists is to foster fear and intimidation, but Australians should be able to go about their business secure in the understanding that the government has worked very closely with law enforcement and other security agencies to keep them safe," Keenan told reporters.

Counterterrorism police had been monitoring the latest suspect, a known extremist and a sympathizer of the Islamic State of Iraq and Syria (ISIS), this year and detained him as he met with people in an attempt to acquire a gun, Patton said.

Australia has strict gun laws and automatic weapons are banned from private ownership.

The man is the 74th suspect arrested in Australia in 31 counterterrorism investigations since Australia's terrorism threat level was elevated to "probable" in September 2014.

The plot was the 14th that police say they had disrupted since the terrorist threat level was raised. Five plots have been executed.

Ali appeared in a Melbourne court Tuesday on charges of preparing to commit a terrorist attack and collecting documents to facilitate a terrorist act. People convicted of those crimes in Australia face a maximum penalty of life in prison. Ali was not required to plea to the charges and did not apply to be released on bail.

Search warrants were issued Monday at a home in a suburb where the suspect lived with his parents and siblings, at a relative's address in another suburb and at a computer business where he once had a part-time job.