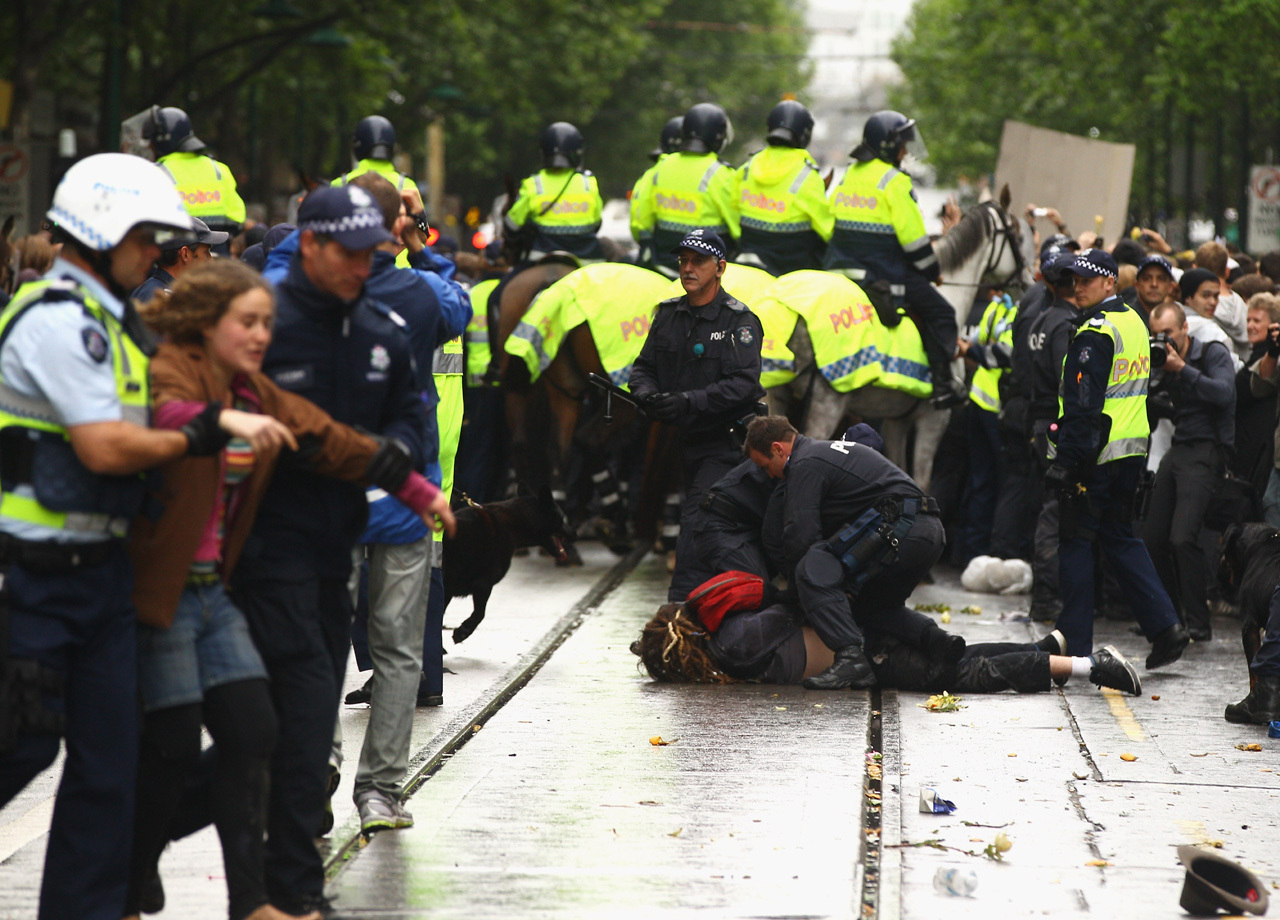 MELBOURNE, Australia - Riot police in Australia's second-largest city broke up a demonstration linked to the "Occupy Wall Street" movement Friday, after a group of around 100 people protesting corporate greed defied an order to vacate a plaza.

Around 20 people, including two police officers, suffered minor injuries in the scuffle, Victoria state Police Assistant Commissioner Stephen Fontana said. Several demonstrators screamed and cried as police dragged and carried them away from the city square, where protesters had been camped out for nearly a week.

The Daily Telegraph reports more than 50 members of the "Occupy Melbourne" movement were arrested; Australia's ABC Network reports about 100 arrests.

On Saturday several hundred protesters marched peacefully through the city from Federation Square to Trades Hall, followed by a large police contingent.

The so-called "Occupy" movement began last month in New York, where people frustrated with America's stubbornly limp economy have been camped out on Wall Street to protest corporate greed and social inequality. Since then, thousands of people have joined similar protests across the globe, including several cities in Australia. Most of the protests have been peaceful — with the exception of a rally in Rome that turned violent last week when protesters smashed bank windows, hurled bottles and set cars on fire.

Around 100 "Occupy" activists in Melbourne had been camped out in the square without incident since Oct. 15, many spending each night there in tents. But the Melbourne City Council finally said it had had enough, and warned protesters to leave by Friday morning or face trespassing charges.

Most activists ignored the eviction order, linking arms and forming a human chain while shouting, "This is a peaceful protest!"

Police fenced off the square and refused to let any additional protesters join the group.

Occupy Melbourne spokesman Jacob Grech said that the demonstration was peaceful, and that the protesters had a right to remain where they were.

"We're telling them that it's their right to protest and stay put," Grech said. "We're letting them know that if they are arrested, they will have legal representation and support."

But riot police with shields eventually moved in, dragging people away and forcing them to stay behind the fence surrounding the square.

Fontana said that around 20 protesters suffered minor injuries, and that one police officer was treated at a hospital for an injury to his eye. Another officer's tooth was chipped during the clash, Fontana said.

The activists who were arrested could face charges including trespassing and resisting arrest, he said.

Fontana denied accusations that police used excessive force and said protesters had been given plenty of time to leave the area voluntarily.

"We've asked the demonstrators to move on peacefully. They obviously haven't," he said. "At some stage, we had to move in. There are other people that would like to use the city square."

Police broke down the campsite, removing tents, trash, food and cardboard boxes that littered the plaza.

Britain: St. Paul's Cathedral has closed to the public because of Occupy London Stock Exchange protesters camped outside, church officials said Friday. The Dean of St. Paul's, the Rev. Graeme Knowles, said the decision to shut the doors of the iconic London church to visitors and tourists following the afternoon service was made with "heavy hearts."

He said health, safety and fire concerns — notably the presence of flammable liquids and stoves set up by protesters — were at the heart of the issue because the church has an obligation to keep visitors safe.

The 92-year-old Seeger, accompanied by musician-grandson Tao Rodriguez Seeger, composer David Amram and bluesman Guy Davis, shouted out the verses of protest anthems as the crowd of about 1,000 people sang and chanted.

They marched peacefully over more than 30 blocks from Symphony Space, where the Seegers and other musicians performed, to Columbus Circle. Police watched from the sidelines.

As the 10 p.m. time of the city's ultimatum passed Friday night, Occupy Oakland demonstrators showed no signs of departing as music blasted from the plaza. More protesters arrived with tents as midnight approached.

Seattle, Wash.: Police said a man affiliated with the Occupy Seattle protests was arrested Saturday morning when he stood in front of a patrol car and refused to move. Officers booked him for obstructing.

On Friday evening officers arrested a 39-year-old man for writing graffiti with chalk on the walls of Westlake Park. He was booked into county jail for property damage. Police have made more than 50 arrests since protesters moved into Westlake at the start of the month.

Albany, N.Y.: The Occupy movement reached the state's seat of political power Friday. An Occupy Albany encampment sprung up at a park across the street from the granite walls of the state Capitol. About 75 protesters, ranging from high school students to retirees, gathered in the afternoon.

Cincinnati, Ohio: Protest said they will continue their occupation despite the arrests of more than 20 members for refusing to leave a downtown park. Police arrested 23 people for trespassing early Friday, when the park was closed for the night.

Manchester, N.H.: Occupy New Hampshire protesters are planning to regroup — and possibly relocate — after a smattering of arrests in Manchester for trespassing. The protesters plan to gather at midday Saturday in Manchester's Veterans Park, the site of Wednesday night's arrests, to plot a course of action. Eighteen protesters were cited by Manchester police for violating a city ordinance prohibiting people from being in parks at night.

Tampa, Fla.: The brewing tension between police and Occupy protesters led to at least six arrests early Friday after demonstrators refused to move off the sidewalk in front of Curtis Hixon Waterfront Park. Police say the protesters were violating city codes.

Later, a small group of protesters marched toward police headquarters in downtown Tampa, chanting "arrest corrupt police." Police spokeswoman Andrea Davis said police are trying to be reasonable, arresting only those who are obstructing the sidewalk.

Holland, Mich.: A pastor who says he was inspired by the Occupy Wall Street movement was arrested after refusing to leave Holland's city hall in protest of the Michigan city's decision not to expand its anti-discrimination ordinance. The Grand Rapids Press and WXMI-TV report the Rev. Bill Freeman was taken away in handcuffs late Wednesday. The Holland activist has campaigned for the city to expand the ordinance to include gays, lesbians, bisexuals and transgender people.

Chicago, Ill.: An online petition is asking Mayor Rahm Emanuel to let Occupy Chicago protesters stay in Grant Park without being arrested. It also says, "Don't let this end like 1968" - an apparent reference to the Democratic National Convention of that year, when Chicago police violently clashed with about 10,000 protesters.

Police arrested 175 protesters early Sunday after hundreds refused to take down tents and leave Grant Park when it closed at 11 the night before.

Tehran, Iran: Dozens of Iranian hard-line students held a rally in front of the Swiss Embassy in Tehran on Saturday to support the 'Occupy Wall Street' movement in the United States. Students chanted anti-U.S. slogans and burnt an Israeli flag calling for the end of capitalism.