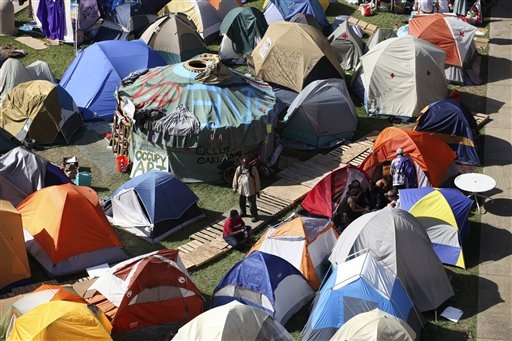 As the 10 p.m. time of the city's ultimatum passed Friday night, Occupy Oakland demonstrators showed no signs of departing as music blasted from the plaza. More protesters arrived with tents as midnight approached.

Earlier, city spokeswoman Karen Boyd said that Oakland gave official notice that the protesters do not have permission to remain overnight and that their encampment is breaking the law. She would not comment on what steps the city would take toward enforcing of the law.

There was no indication of significant police presence early Saturday. A lone Oakland police cruiser seen passing the site around 11:30 p.m. was greeted with waves from protesters.

Many protesters said they have no intentions of leaving even though the city announced Thursday that it can no longer ensure public health and safety at the site.

"I'm not going anywhere. They're going to have to come and take me away," said Christopher Dunlap, 23, who said he has been on the City Hall lawn since the first day of the encampment.

Several cities in the United States and around the world have arrested anti-Wall Street protesters who have failed to leave public areas.

While Oakland said it will no longer allow protesters to stay at the site overnight, they can demonstrate there from 6 a.m. to 10 p.m., Boyd said.

Protester Gerry Johnson, 55, who said he has been at the site for more than a week said it's unlikely his fellow demonstrators will leave.

"I'm trying to keep calm," Johnson said. "We're here for a good cause. I think we'll stand our ground."

The encampment has quickly grown from a few dozen tents to more than 150, causing overcrowding and tension. Some protesters moved to another site across town.

Oakland officials had said the city was committed to allowing free speech and let protesters camp on the City Hall plaza as Mayor Jean Quan proclaimed on Wednesday that sometimes "democracy is messy.

By the next day, however, the city cited an increasing rat problem, repeated requests for protesters to remove fire hazards, then public urination and acts of violence also as reasons for them to pack up and go.

Boyd said the group cooperated in the beginning, but things had changed as they "exceeded their ability to address public health and safety issues."

"We have been very clear about the expectations," Boyd said. "It has gotten to a point where individuals can no longer maintain the plaza. It's deteriorated to the point where we needed to take strong action."

The vacate notice didn't sit well with protesters. Since their arrival, they have created a 24-hour kitchen, complete with pots, pans and a stove as well as areas for health and child care.

And despite not having a clear leader, several organizers gather daily for "general assembly" meetings and say they have activities planned outside City Hall through next week.

"We've already curbed two problems in downtown Oakland: we've solved hunger and we've solved homelessness," Shake Anderson, an organizer, said Friday. "No one is here to destroy anything ... We're not breaking any laws."

On Friday, Oakland Interim Deputy Fire Chief Lisa Baker toured the perimeter of the site after saying firefighters were threatened and harassed while responding to three 911 calls Thursday.

"Can I talk to your president? Who's in charge?" Baker asked.

Robin Woods, an Oakland Occupy member, replied, "We don't have one. This is a leaderless movement."

Baker said, "Look, we're not trying to be confrontational, but if someone calls 911, they will get the care and service that we provide."

Baker urged Woods to pass along her thoughts to organizers. The two shook hands.

Anderson, a protest organizer, said that he hopes the city doesn't try to take down the community built by demonstrators.

"This has no corporate ties. This is all public, all people, that's why this is a threat," Anderson said. "This is a peaceful assembly, so therefore if you want to violently come in here, what does that say about America?"