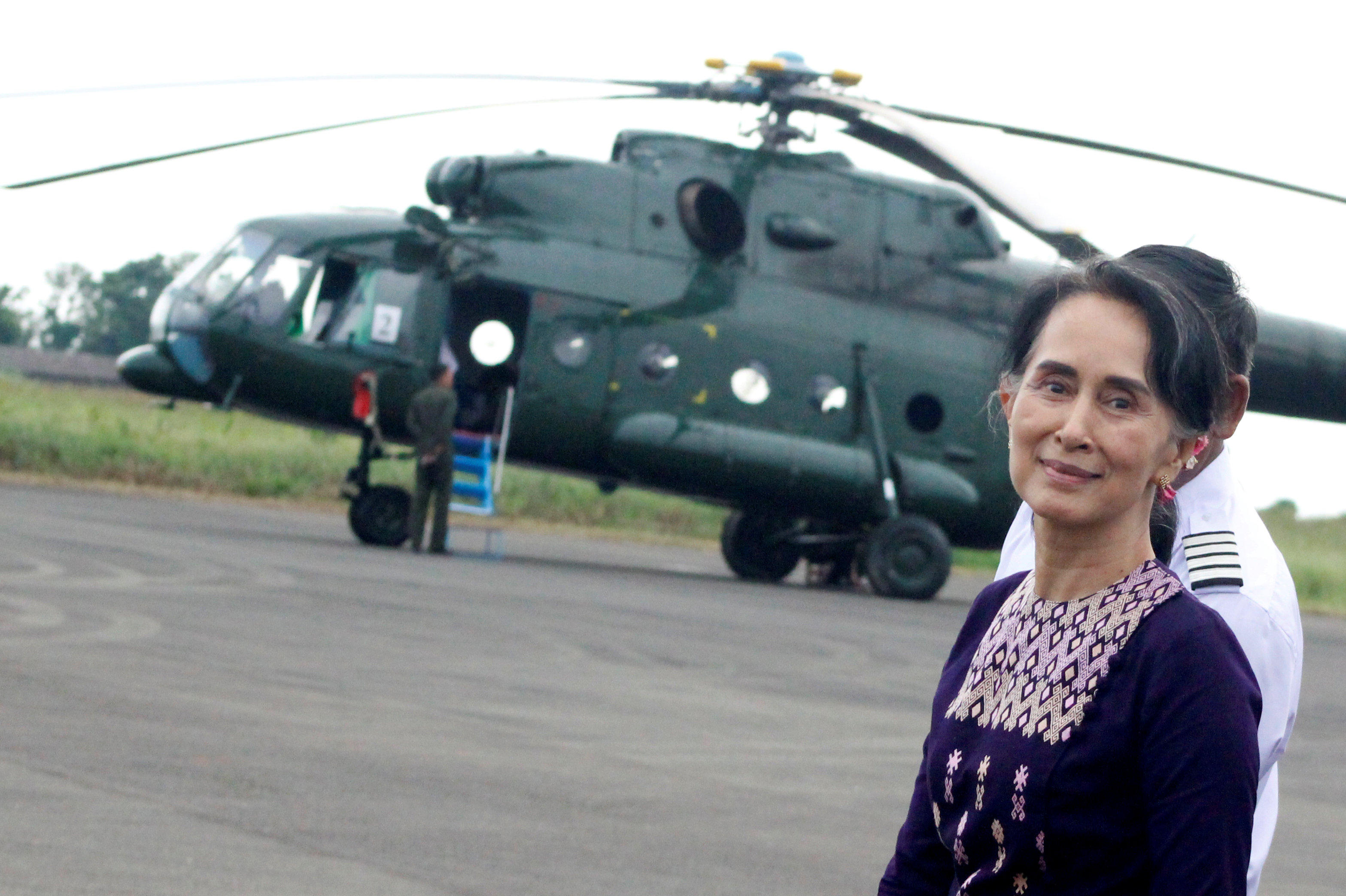 YANGON, Myanmar -- Aung San Suu Kyi made her first visit as Myanmar's leader Thursday to the conflict-torn region where more than half a million Rohingya Muslims have fled state-led violence that has spiraled into Asia's worst refugee crisis in decades.

Her visit to Rakhine state comes as Suu Kyi is under intense international scrutiny for her response to the exodus, which the U.N. has called "ethnic cleansing," and as her government said it is working on a plan to repatriate those who fled to Bangladesh.

Suu Kyi arrived in the state capital, Sittwe, in the morning and headed to restive northern Rakhine where many Rohingya villages were located. During a 2015 election campaign, she visited southern Rakhine, where there hasn't been much conflict.

"The state counselor just arrived but she is heading to Maungdaw, northern Rakhine, with the state officials," said Tin Maung Swe, a deputy director of the Rakhine government, using Suu Kyi's official title.

Government spokesman Zaw Htay would not release Suu Kyi's plans for the trip until later because of security concerns.

More than 600,000 Rohingya Muslims have fled to Bangladesh since Aug. 25, when security forces in Buddhist-majority Myanmar began what they called "clearance operations" in response to deadly attacks on police outposts by insurgents. The campaign has included the burning of Rohingya villages and alleged widespread rights violations.

Fleeing Rohingya have described arson, rape and shootings by Myanmar soldiers and Buddhist mobs that left them no option but to make the dangerous and sometimes deadly journey through jungles and by sea to Bangladesh.

The exodus has slowed at some points but has not stopped.

On Thursday morning, at least 2,000 terrified and starving Rohingya huddled in rice paddy fields near one border crossing on the Naf river. They had waited for more than 24 hours for permission to enter Bangladesh and spent the night in the muddy fields.

The global image of Suu Kyi, a Nobel Peace laureate, has been damaged by the crisis and she has come under intense criticism to do more to end the violence and condemn those responsible. Several fellow peace prize winners have publicly condemned Suu Kyi for what they see as her apparent indifference to the plight of the Rohingya.

Though Suu Kyi has been the de facto head of Myanmar's civilian government since her party swept elections in 2015, the former political prisoner is limited in her control of the country by a constitution written by the military junta that ruled Myanmar for decades. The military has effective veto power over all legislation and controls key ministries including those overseeing security and defense.

The military is in charge of operations in northern Rakhine, and ending them is not up to Suu Kyi.

Even when Suu Kyi has spoken on the issue, she has drawn criticism. In a September speech, her first public comments after the current crisis began, she asked for patience from the international community and suggested the refugees were partly responsible, saying more than half of the Rohingya villages had not been destroyed by the violence.

Suu Kyi faces a potential domestic backlash if she speaks on behalf of the Rohingya, who have been the target of anti-Muslim rhetoric. Many people agree with the official government stance that there is no such ethnicity as Rohingya and that those in the country have illegally migrated from Bangladesh.

Though Rohingya first arrived generations ago, they were stripped of their citizenship in 1982, denying them almost all rights and rendering them stateless. They cannot travel freely, practice their religion, or work as teachers or doctors, and they have little access to medical care, food or education.

Myanmar's backers globally have also had to tread carefully, not wanting to undermine Suu Kyi's weak civilian government at a time when the country is just emerging from decades of authoritarian rule. Still, counties such as the U.S. have warned Myanmar about potential repercussions if it doesn't address the crisis, including the risk of attracting international terrorists, scaring off investment, and ultimately stunting its transition to democracy.

The government said Tuesday that it is ready to repatriate Rohingya who had fled, but blamed Bangladesh for slowing the process.

"We are ready to accept the refugees and to start a verification and scrutiny process, but we have not reached an agreement with the Bangladeshi authorities for repatriation," said Zaw Htay, the government spokesman.

He said those who could prove they were residents of Myanmar would be allowed to return. Many Rohingya have no identity documents.

Ali Hossain, a top government administrator in Bangladesh's Cox's Bazar district, said Wednesday that Bangladesh is doing "more than enough" to help the refugees, and placed the blame for delays in the repatriation process on Myanmar.

"Myanmar is talking about repatriation but more and more people are still being forced to come to Bangladesh," he said. "There is a situation in Myanmar. We know that, the whole world knows that."

"Bangladesh is not playing any tricks here. We are doing our best," he said.