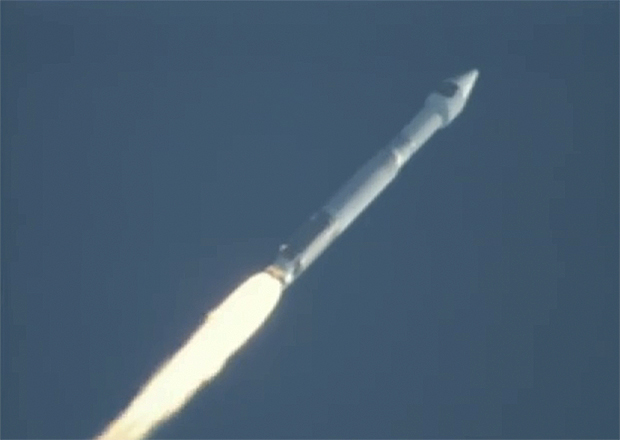 A United Launch Alliance Atlas 5 rocket powered by a Russian first-stage engine -- the focus of renewed debate over U.S. reliance on Russian space technology -- roared to life and climbed away through a cloudless sky Thursday, kicking off a classified mission to boost a National Reconnaissance Office satellite into orbit.

The first stage appeared to perform normally and the rocket's second-stage hydrogen-fueled RL10 engine ignited as planned to continue the push toward space.

But in keeping with standard practice for classified NRO missions, ULA ended its launch coverage and commentary five minutes after liftoff, well before the secret payload reached its intended orbit.

Given the rocket's apparent easterly trajectory, amateur satellite trackers believe the payload may be an advanced data relay spacecraft, part of a globe-spanning network used to collect and pass along signals from other spacecraft and ground units.

Payload aside, the launching highlighted the controversy that has enveloped the RD-180 first stage engine, one of the most powerful kerosene-oxygen engines in the world.

Generating nearly 900,000 pounds of thrust at liftoff, the RD-180 is built by NPO Energomash and was developed for the Atlas 5 by AD AMROSS, a partnership between Energomash and Pratt & Whitney Rocketdyne. The RD-180 has flown aboard 51 Atlas rockets since 2000, chalking up a flawless record.

But in the wake of the Ukraine crisis, subsequent U.S. sanctions and increasingly heated rhetoric, ULA's use of Russian engines to launch critical national security payloads has drawn fire from lawmakers and a legal challenge from SpaceX, ULA's major U.S competitor.

SpaceX alleged in a federal complaint that payments for RD-180s appeared to violate Obama administration sanctions, implying that Dmitry Rogozin, Russia's deputy prime minister for space and defense, might personally profit from the engine contracts. Rogozin is one of the Russian leaders personally singled out for U.S. sanctions.

A federal judge issued a temporary injunction blocking purchases of RD-180 hardware but lifted the ban a few days later, after officials with the departments of Treasury, Justice and State submitted opinions that continued payments did not, in fact, violate the sanctions.

Rogozin upped the ante by recently tweeting that Russia would forbid the use of RD-180s for future U.S. military missions. He also threatened to pull out of the International Space Station program after 2020, suggesting Russia might not go along with NASA's desire to operate the lab through at least 2024 and possibly longer.

So far, the Russian government has not issued any official notification of a change in policy governing the RD-180 or the space station, U.S. officials say, but Rogozin's bluster has triggered widespread concern.

Secretary of Defense Chuck Hagel ordered a review to study the issue, including what might be needed to build a replacement engine. The panel's report has not yet been released, but Bloomberg News reported Wednesday that it calls for development of a new engine, a project that could cost as much as $1.5 billion and take up to six years to complete.

The Atlas 5, designed by Lockheed Martin, and Boeing's Delta 4 are known as evolved expendable launch vehicles, or EELVs. The two companies initially were competitors, but they joined forces in 2006 and set up United Launch Alliance, offering "assured access to space" with two independent families of rockets.

The Lockheed Martin-designed Atlas 5 has used the RD-180 since its inception while Boeing's Delta 4 family of rockets utilizes American-made engines.

Michael Gass, president and CEO of ULA, told reporters at an aerospace conference earlier this week that his company has 16 RD-180 engines in hand, enough to cover two years of Atlas operations. Five more engines are scheduled for delivery later this year.

Faced with a possible disruption in its supply chain, ULA engineers are accelerating construction of already planned Delta 4 rockets and studying options for shifting some high-priority national security payloads from Atlas to Delta if necessary.

"Since we started our activity on the EELV program and selected the RD-180, there's always been a contingency plan," Gass said. "First, our nation has assured access (to space) as a policy, we deliver two fully qualified systems that are capable of supporting all of our national security needs.

"We've kept a safety stock of engines in place to help with a smooth transition to move all those payloads to Delta 4 if necessary. And the first thing we're doing is making sure we're implementing that contingency plan, which includes the acceleration of Delta 4 production."

Gass said the engines purchased to date were exported under a contract that allows "dual use" for civilian and military missions. If a Russian ban on using RD-180s for U.S. military missions is imposed at some point, Gass said ULA "would accept those engines and apply them to our NASA civil and commercial customers and we'll hold the ones that were exported for dual use to be used by our national security payloads."

Last year, ULA won a sole-source Air Force contract for a "block buy" of 36 rocket "cores" that will make up 27 Atlas and Delta launch vehicles. The Air Force initially expected to need 50 cores, reserving 14 for competitive bidding, Seven of those 14 missions now have been deferred, leaving seven flights up for grabs.

ULA, Gass said, has committed to building all 50 cores even though it has not yet secured customers for the vehicles outside the 36-core block buy.

In the same complaint questioning use of the RD-180, SpaceX challenged the sole-source contract, arguing the company's Falcon 9 rocket should have been considered for at least some of the block-buy missions.

The Falcon 9 is a relatively new launcher with just nine flights to its credit, all of them successful. An upgraded version of the rocket, the Falcon 9 version 1.1, has flown four times.The Air Force is in the process of certifying the Falcon 9 for military payloads, a process that requires three successful flights in a row and a detailed review of engineering, manufacturing and business practices.

"They cannot compete, will not compete, until they are certified," Gen. William Shelton, commander of Air Force Space Command, told reporters earlier this week. "The fact that SpaceX has completed three certification launches, that's just openers. There's a tremendous amount of analysis that needs to be completed.

SpaceX, not surprisingly, disagrees. Spokeswoman Emily Shanklin, in an email to CBS News, cited a letter from the Air Force to the Government Accountability Office saying companies are free to compete for Air Force contracts as soon as data from the third certification flight is delivered to the government.

"By March 22nd, 2014, SpaceX had delivered the data from our final certification launch to the Air Force and consequently, SpaceX is eligible to compete," Shanklin said.

But that was not the case last year, when the block buy contract was finalized, and Gass repeated his belief that SpaceX is still not certified for any of the missions covered by the contract. He also said SpaceX grossly overstated the cost of ULA rockets in challenging the sole-source block buy.

In a break with a long-standing policy of declining to discuss cost, Gass said a heavy-lift three-core Delta 4 rocket ran about $350 million in the block buy contract while the least-powerful Atlas 5 variant, a single-core vehicle roughly comparable to the Falcon 9, cost less than $100 million.

He said the average cost of a ULA rocket under the block-buy contract and the company's decision to build an additional 14 rocket cores, came out to $225 million per vehicle.

SpaceX founder and chief designer Elon Musk has said ULA rockets cost more than $400 million per flight and suggested the U.S. government would be better off abandoning the Atlas 5 in favor of the Falcon 9. SpaceX advertises the cost of a Falcon 9 at around $60 million, although Musk acknowledges military contracts could add some $30 million per flight.

"The Air Force budget for 2015 speaks for itself," Shanklin said. "In the budget, three single core vehicles add up to $1.212 billion, or $404 million per vehicle. Mr. Gass' statements run counter to budget reality. ULA has the most expensive launch services in the world, nearly double that of the next most expensive competitor. When you don't have to compete, there's little incentive to control costs or innovate."

Gass dismissed the SpaceX concerns, saying the block buy was negotiated over several years and that SpaceX was aware of the plan throughout its development.

"SpaceX is trying to change the rules for them, even though it may not be in the best interest of the taxpayer and most importantly, not in the best interest of the critical war fighting capabilities we're delivering to our customers," Gass said. "We're focused on supporting the mission. It's time for the other company prove its technology and match its rhetoric with on-schedule performance."