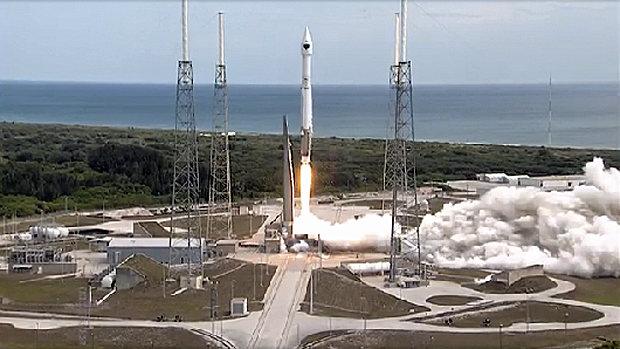 The 189-foot-tall Atlas 5's Russian-built RD-180 first-stage engine ignited with a rush of flame and throttled up to full thrust at 11:36 a.m. EDT (GMT-4), quickly pushing the rocket away from launch complex 41 at the Cape Canaveral Air Force Station.

Generating 860,200 pounds of thrust, the RD-180 boosted the rocket out of the dense lower atmosphere, arcing away to the east atop a jet of fiery exhaust and dwindling from view in a partly cloudy sky. The engine shut down a little more than four minutes after liftoff and the first stage fell away as planned a few seconds later.

The Atlas 5's hydrogen-fueled Aerojet Rocketdyne RL10C-1 engine then ignited for the first of two planned burns, shutting down 13 minutes later after reaching a preliminary parking orbit. A second firing three hours and 17 minutes after launch was required to put the $245 million GPS 2F-10 satellite into its operational 12,700-mile-high orbit.

The Global Positioning System utilizes a minimum of 24 satellite in six orbital planes, each one broadcasting ultra-precise timing signals from an on-board atomic clock and up-to-the-second location data.

At least four satellites are above the horizon from any point on Earth, allowing compact GPS units to calculate a user's position, altitude and velocity to within a few feet and a fraction of a mile per hour.

The GPS 2F-10 launch was the program's 70th since 1978 and the 55th straight success for ULA's workhorse Atlas 5. The new satellite will replace an older spacecraft in the current 31-satellite fleet, which will serve as an on-orbit backup.