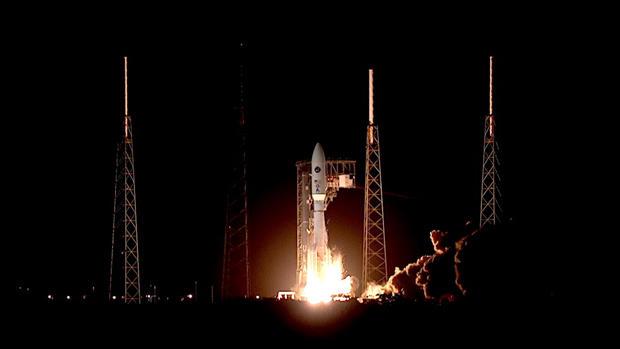 Lighting up the night sky, a high-power Atlas 5 rocket streaked away from Florida early Wednesday carrying a $1.8 billion military communications satellite built to withstand the most powerful jamming and even the effects of a nearby nuclear blast to ensure steady communications with troops around the world.

Generating a combined 2.6 million pounds of thrust, the powerful engine and side boosters quickly pushed the 197-foot-tall rocket away from pad 41 at the Cape Canaveral Air Force Station, lighting up Florida's "Space Coast" for dozens of miles around.

It was only the ninth flight of United Launch Alliance's most powerful "551" version of the Atlas 5, a variant that debuted in 2006 when it boosted NASA's New Horizons probe on a fast-track trajectory to Pluto.

Putting on a dazzling sky show, the rocket quickly arced away to the east over the Atlantic Ocean trailing a long jet of rushing flame as it rapidly consumed propellants, lost weight and steadily accelerated out of the thick lower atmosphere.

The strap-on boosters fell away about a little less than two minutes after liftoff and the first stage followed suit two-and-a-half minutes later. At that point, a hydrogen-fueled Aerojet Rocketdyne RL10C engine in the rocket's Centaur second stage took over, continuing the climb to a preliminary orbit.

Perched atop the Centaur was the Pentagon's fourth Advanced Extremely High Frequency communications satellite bound for a circular orbit 22,300 miles above the equator. At that altitude, satellites take 24 hours to complete one orbit and thus appear stationary in the sky, allowing the use of fixed antennas on the ground.

To reach that orbit, the Centaur engine was expected to fire three times, putting the satellite into an elliptical orbit with a high point of about 21,800 miles and a predicted low point of 5,500 miles.

On board thrusters will be used to circularize the orbit at 22,300 miles and to maneuver the AEHF-4 satellite into its final operational location, joining three other AEHF relay station's already in space. Two more are scheduled for launch in 2019 and 2020.

Built by Lockheed Martin, the AEFH satellites are designed to provide a global network of secure, jam-proof communications for strategic command and control and for tactical missions around the world. The satellites are shared by the United States, Canada, the United Kingdom and the Netherlands.

"This is the nation's only strategic and tactical protected comm satellite network," said Mike Cacheiro, Lockheed Martin's AEHF program manager. "It's also the only system that survives through a near nuclear burst and can provide communications through environments that other comm systems could not.

"So on a really bad day, you really want to have this system in place," he said.

The AEHF satellites can handle 10 times more data than the older Milstar relay stations they are replacing, feature extreme encryption and are designed to give "senior leadership a survivable line of communications to military forces in all levels of conflict, including nuclear war," ULA said in a brochure describing the mission.

"Advanced EHF is built to withstand and overcome even the toughest, most sophisticated jamming threats that are out there," Cacheiro said. The new satellites are "central to our assured, resilient communications for our war fighters and for our commander in chief to survive and operate through virtually any operation."

The first two satellites in the AEHF system, launched in 2010 and 2012, cost about $5.8 billion, including ground systems and terminals. The third satellite in the series cost some $900 million. The fourth satellite, featuring a variety of modifications, had a price take of $1.8 billion, officials said.

Once checked out and on station, the AEHF-4 satellite will join its three siblings in a ring around the planet providing continuous communications coverage between 65 degrees north and south latitude. The satellites can be cross linked to route communications around the world from different ground stations.

"It's not only incredibly secure, it delivers unprecedented speed and bandwidth for the protected channels," Cacheiro said. "In fact, one Advanced EHF satellite provides the same capacity as the existing constellation of five Milstar satellites that are in orbit today. The data rates are 10 (times) what we have on Milstar.