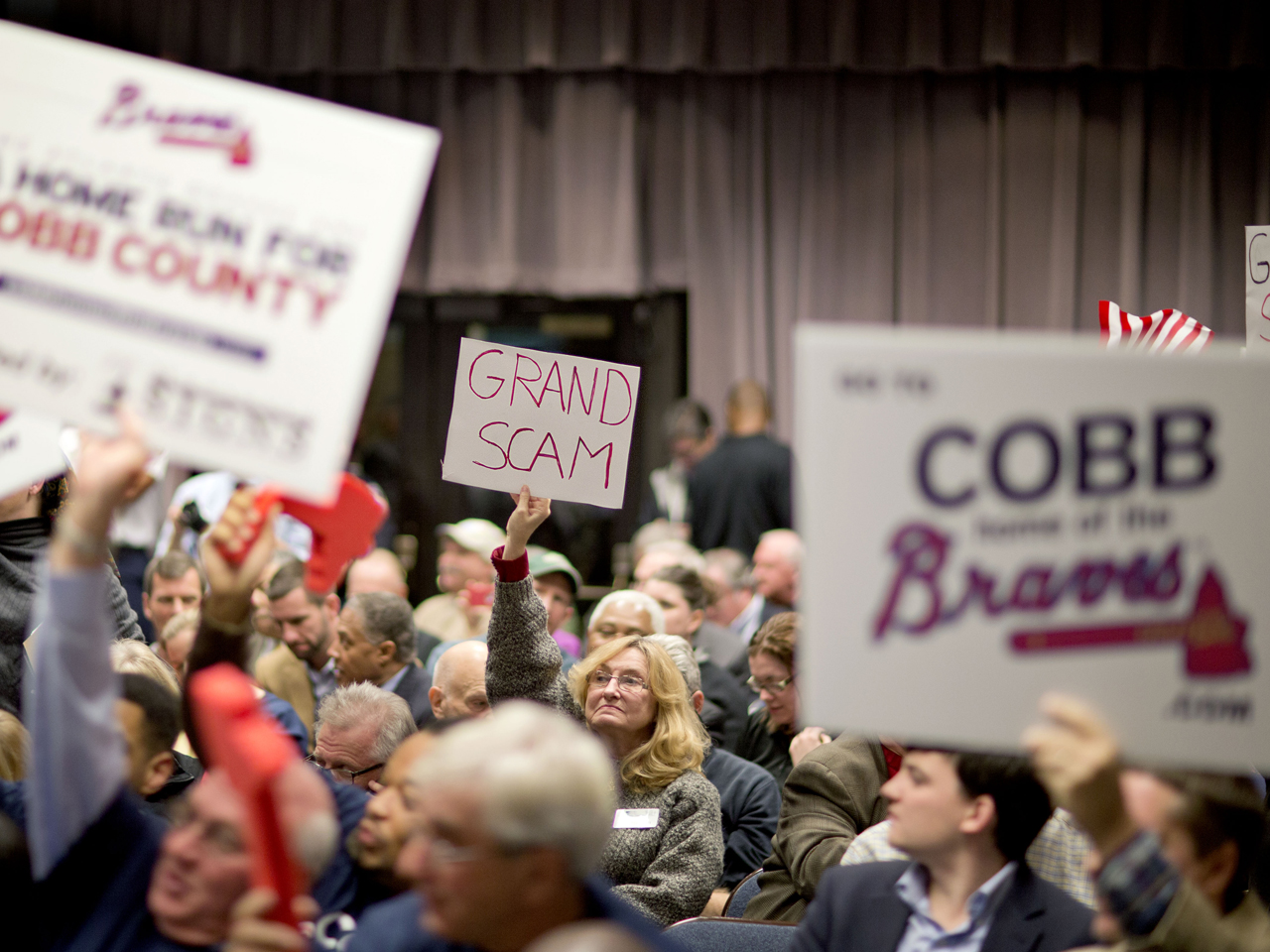 ATLANTA  - A deal for hundreds of millions of dollars in public money to draw the Atlanta Braves north of their downtown home is pitting conservative tea party activists against the elected and civic leaders in the staunch Republican county, with opponents saying the use of public money to help a private business is not what American capitalism should be about.

The argument for the deal is simple, says Cobb County Commission Chairman Tim Lee and other supporters. Almost $400 million in county bonds and immediate infrastructure improvements, with debt payments approaching $600 million over 30 years - will generate enough economic activity and, thus, tax revenue to justify the spending.

"This is a home run for Cobb County," Lee said at a public hearing on the eve of the commission's 4-1 vote, "and I'm confident the people of Cobb will come to understand that."

It's all "appalling hypocrisy" and "arrogance," Dooley explained, particularly from the four Republican commissioners who pitch their conservative credentials and champion the idea of a free market. Dooley and other tea partiers typically associate active, expensive government with Democrats, but it was the commission's lone Democrat who cast the only dissenting vote.

Citizens' groups have blasted both the financing arrangement and the secretive manner that it came about, with commissioners approving a deal in late November, just weeks after Lee and Braves executives shocked Major League Baseball and metropolitan Atlanta by announcing a plan they'd hammered out in private.

The tea party groups have built an alliance that even includes activists like Cobb resident Rich Pellegrino, who frequently leads liberal and progressive causes in the GOP-leaning county. "The labels here don't really matter," Pellegrino said. "Whether it's Republicans, Democrats, whatever, what's going on here is that the chamber of commerce types run the county, and the politicians are doing their bidding."

The coalition members say they're exploring a range of legal options, from lawsuits to petitions to oust Lee and his colleagues from the commission.

President Barack Obama made it for his stimulus package in 2009 and President Franklin Roosevelt did the same for New Deal spending programs: Public spending will spur private economic activity. Lee adds a familiar pitch about the value of "public-private partnerships," arguing that the Braves will carry most of the billion-dollar project cost.

Commissioner JoAnn Birrell said, "There's no one who's more Republican and fiscally conservative than me." But, she insisted, "This is a no-brainer."

She justified the quick action by saying the city of Atlanta, where the Braves have played for 47 years since moving from Milwaukee, would counter Cobb's incentives if given the opportunity.

Dooley, meanwhile, conceded the potential benefits of public spending on infrastructure and education that helps fuel private enterprise. But the Braves deal, she said, is elected politicians steering money to favored businesses. "The government is not supposed to pick winners and losers," she said. "This is anything but free-market."

Many Cobb business leaders back the plan, and they were vocal at the series of hastily arranged town hall meetings around the county before the commission approved the deal Nov. 26.

Supporters wore T-shirts paid for by Cobb business owners. They read: "Come to Cobb: Home of the Braves." The spirited residents waved foam tomahawks that have become a staple at Turner Field, the downtown stadium the Braves plan to abandon at the end of the 2016 season.

Atlanta's Democratic Mayor Kasim Reed, meanwhile, has reacted to the shock of losing the Braves with not-so-veiled barbs at his Republicans neighbors. "We can't spend money that liberally in the city of Atlanta," he said. "We are fiscal conservatives here."

Reed conveniently ignores that he recently committed at least $200 million in public bonds for a new retractable-roof stadium for the NFL's Atlanta Falcons. But he nonetheless highlights the curious politics at play in the more conservative suburbs.

The Braves deal calls for a $672 million, publicly owned stadium that would open in 2017 about 10 miles northwest of downtown. Separately, the team would finance a commercial development around the ballpark.

By Lee's explanation, taxpayer's share is $300 million, though the details are debatable.

Cobb County would spend $24 million on initial infrastructure improvements and sell $276 million in bonds for construction. The county's annual debt payments would be $17.9 million over 30 years, totaling $537 million. The payment would come from $8.67 million in existing property taxes that now pay off debt for park projects. The rest would come from lodging taxes, a rental car tax and levies on businesses in a special commercial district around the stadium site.

The Braves' initial contribution would be $280 million. The remaining $92 million would come from debt that the county says belongs to the team, bringing the Braves' share to $372 million, or 55 percent of the total. But that $92 million would also come from public bonds beyond the county's $276 million, and it would require additional debt payments of $6.1 million. That would be covered partly by the team's $3 million annual stadium rent payment to the county and $1.5 million in money from a corporate sponsor that would pay the team for naming rights for the publicly owned stadium.

Construction estimates do not included maintenance and capital improvements at the stadium. The county has agreed to split those costs over the 30-year agreement, though neither party has released detailed numbers for those expenses.

Dooley says all the variables make clear that the public cost is well beyond the $300 million figure that Lee emphasizes.

The coalition of opponents initially asked commissioners to postpone the Nov. 26 vote for a memorandum of understanding between the county and the team. Pellegrino says the next step is submitting a detailed list of questions that the MOU outline hasn't yet answered.

There's also the possibility of legal challenges for various components of the financing deal, including the plan to redirect existing property tax revenues to pay off stadium debt. Then, Dooley says, there's the task of going after the commissioners' jobs, first through recall petitions and, if that fails, when they're up for re-election.