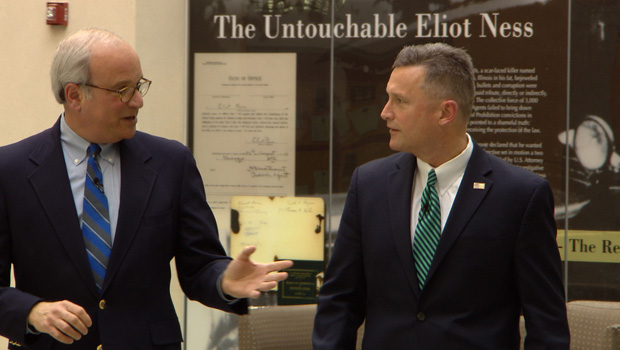 In his first television interview, Bureau of Alcohol, Tobacco, Firearms and Explosives (ATF) Deputy Director, Head Thomas Brandon tells CBS' "Sunday Morning" that the agency's job is not to take away firearms from people, but to regulate weapons that can be misused.

"We're a small agency with a big job," Brandon tells correspondent Richard Schlesinger, in an interview to be broadcast Sunday, July 31.

Brandon also says his agency is hampered by not having the necessary technology. Congress has imposed constraints on ATF, such as prohibiting the agency from creating a computerized database of gun purchases.

The roots of the current ATF were planted in 1791 by Alexander Hamilton, when he decided to collect taxes on whiskey. Over time, the agency morphed into today's ATF, which now pursues illegal gun traffickers, as well as conducting arson and explosive investigations.

The agency has played key roles in the Pulse nightclub shooting investigation, the World Trade Center bombing, and the attack on the Oklahoma Federal Building.

Yet, it's also an agency that is targeted by gun advocates and Members of Congress, who see the agency as a threat to legal gun ownership.

"I think we ought to get rid of the ATF," says Rep. James Sensenbrenner (R-Wis.). Sensenbrenner opposes the AFT having a searchable database of gun manufacturing and gun sales because, he says, it amounts to "de facto gun registration."

Yet, Brandon says, not having the database hurts. Indeed, after the San Bernardino shootings, it took 12 hours to find out who owned the guns used in the attack. He says a computer database would have helped, and adds that not having one simply doesn't make sense.

"There's a lot of things that don't make sense in this town, you know?" Brandon tells Schlesinger. "And, so, yeah, would it be efficient and effective? Absolutely. Would the taxpayers benefit with public safety? Absolutely. Are we allowed to do it? No."

Schlesinger's report on the ATF is part of a special "Sunday Morning" broadcast this weekend, titled "Guns and America."