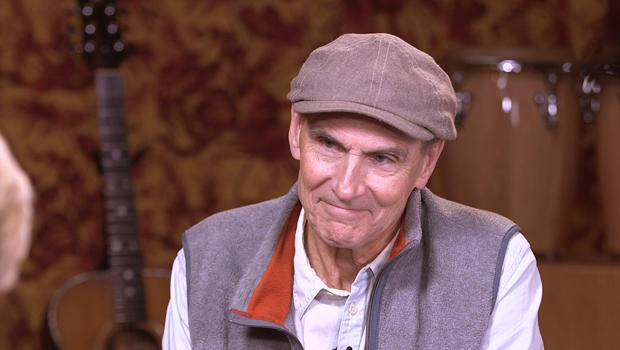 Singer-songwriter James Taylor, 71, is still making music. However, he never envisioned still performing at his age, and says he gets revitalized in front of an audience, he tells "CBS Sunday Morning" anchor Jane Pauley in an interview to be broadcast Sunday, February 2.

Taylor's half-century-long career includes such classics as "Fire and Rain," "You've Got a Friend" and "Sweet Baby James," to name just a few. He's also had some ups and downs, including a well-documented battle with drugs.

He survived it all. "That's remarkable, too," Taylor said.

At his home in Lenox, Massachusetts, Taylor talked with Pauley about his hit-making career; his life; and his new album, "American Standard," a collection of classic American songs – such as "Moon River" and "Pennies from Heaven" – that he's reimagined for today's audience.

There is also a new audio-only memoir, "Break Shot: My First 21 Years," which is based on conversations with "Sunday Morning" contributor Bill Flanagan.

While he never imagined he'd be this age and still working, he's also not letting up. Taylor will hit the road in the spring on a new tour. And he admits he still thrills at performing before an audience: "Live performance, some people love it, and other people – some are worn down for it. But for me, it feeds me. It's a celebration."

He said it's "undeniably sort of revitalizing to have an audience react to a song they came to hear."

To hear James Taylor perform "Teach Me Tonight," from his upcoming album, "American Standard," click on the video player below: