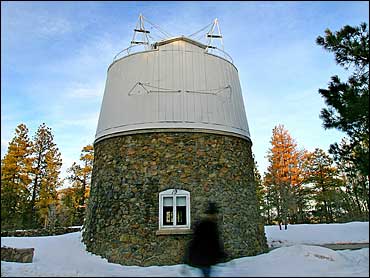 Scientists have discovered the universe's largest known planet, a giant ball made of mostly hydrogen that is 20 times larger than Earth and circling a star 1,400 light-years away.

Scientists believe the planet is 1.7 times the diameter of Jupiter, the largest planet in our solar system, and has a temperature of 2,300-degrees.

"There is probably not a really firm surface anywhere on the planet. You would sink into it," said Georgi Mandushev, a research scientist at Lowell Observatory and lead author of an article announcing the finding in the peer-reviewed Astrophysical Journal Letters.

Lowell, along with the California Institute of Technology's Palomar Observatory in San Diego County and telescopes operating in Spain's Canary Islands, discovered the planet circling a star in the constellation Hercules.

Lowell announced the finding Monday. Scientists first spotted the new planet, called TrES-4, and a smaller one in spring 2006. Scientists at Caltech, Harvard University and the W.M. Keck Observatory in Hawaii later confirmed the discovery.

"It's very solid stuff," astronomer Alan Boss at the Carnegie Institution of Washington said of the discovery of TrES-4. He marveled at the planet's extremely low density, about half that of Saturn in our solar system.

"It's just letting us know that nature has some surprises for us ... a much wider range of possibility than we could imagine," Boss said.

He said scientists "can't understand why these so-called fluffy planets are so fluffy. It really is a mystery, just how they can be so low-density."

The participating Lowell telescope is housed on top of Anderson Mesa, about 15 miles south of Flagstaff.

Lowell is best known for the 1930 discovery of Pluto, which since has been demoted from planet status.