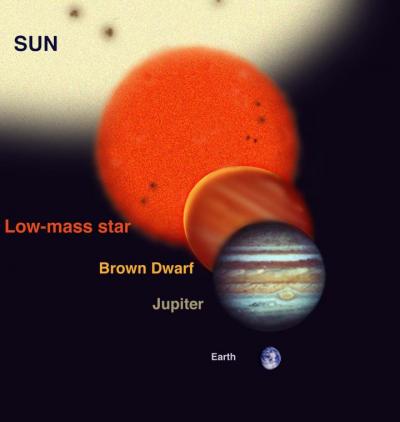 Imagine an infantile version of our 4.6 billion-year-old sun. Now picture a "failed star," a brown dwarf, about the size of Jupiter, tightly orbiting that 12 million year old stellar baby-at the distance Uranus orbits our sun. Astronomers have just found such a duo: a star about the mass of our sun with an unusually close brown dwarf companion.

Of the similarly situated brown dwarfs that astronomers have imaged, most keep their distance, orbiting at about 50 AU (or 50 times the average distance from the Earth to the sun). A team of astronomers believe the distance between this young sun, called PZ Tel A, and its dwarf companion, PZ Tel B, is less than half that, a mere 18 AU.

A paper to appear in Astrophysical Journal Letters details the find, which was made using images from the Near-Infrared Coronagraphic Imager on the Gemini-South telescope in Chile. The researchers predicted the orbit by using two observations, one in April of 2009 and another in May of 2010 and then calculated the brown dwarf's motion using a computer model.

Because PZ Tel A is young and sun-like, researchers say, that it might present a good history lesson on our own solar system. In fact, according to the Observatory, "PZ Tel is young enough to still possess significant amounts of cold circumstellar dust, which may have been sculpted by the gravitational interaction with the young brown dwarf companion. This is the material that can form planets so the PZ Tel system is an important laboratory for studying the early stages of planetary system formation.

Astronomers say that the brown dwarf is about Jupiter's size, but is around 36 times its mass. Though they have imaged PZ Tel A before, they couldn't pick out its dim companion because of its proximity. The University of Arizona notes that an older image, taken seven years ago and reanalyzed by Laird Close, a professor at UA's Steward Observatory and the department of astronomy, showed PZ Tel B was obscured by the glare from its parent star as recently as 2003, indicating its orbit is more elliptical than circular.

"Because PZ Tel A is a rare star being both close and very young, it had been imaged several times in the past," said Close. "So we were quite surprised to see a new companion around what was thought to be a single star."

The Near-Infrared Coronagraphic Imager gave them more power than previously possible, as its a high-contrast instrument designed for finding dim bodies circling bring stars, like exoplanets or brown dwarfs, and can pick out a companion up to one million times fainter than the host star.

An international team is now using the telescope to complete a 300-star survey, the largest such survey to date, so hopefully more brown dwarfs will come out of hiding soon.

By Joseph Calamia of Discover Magazine.