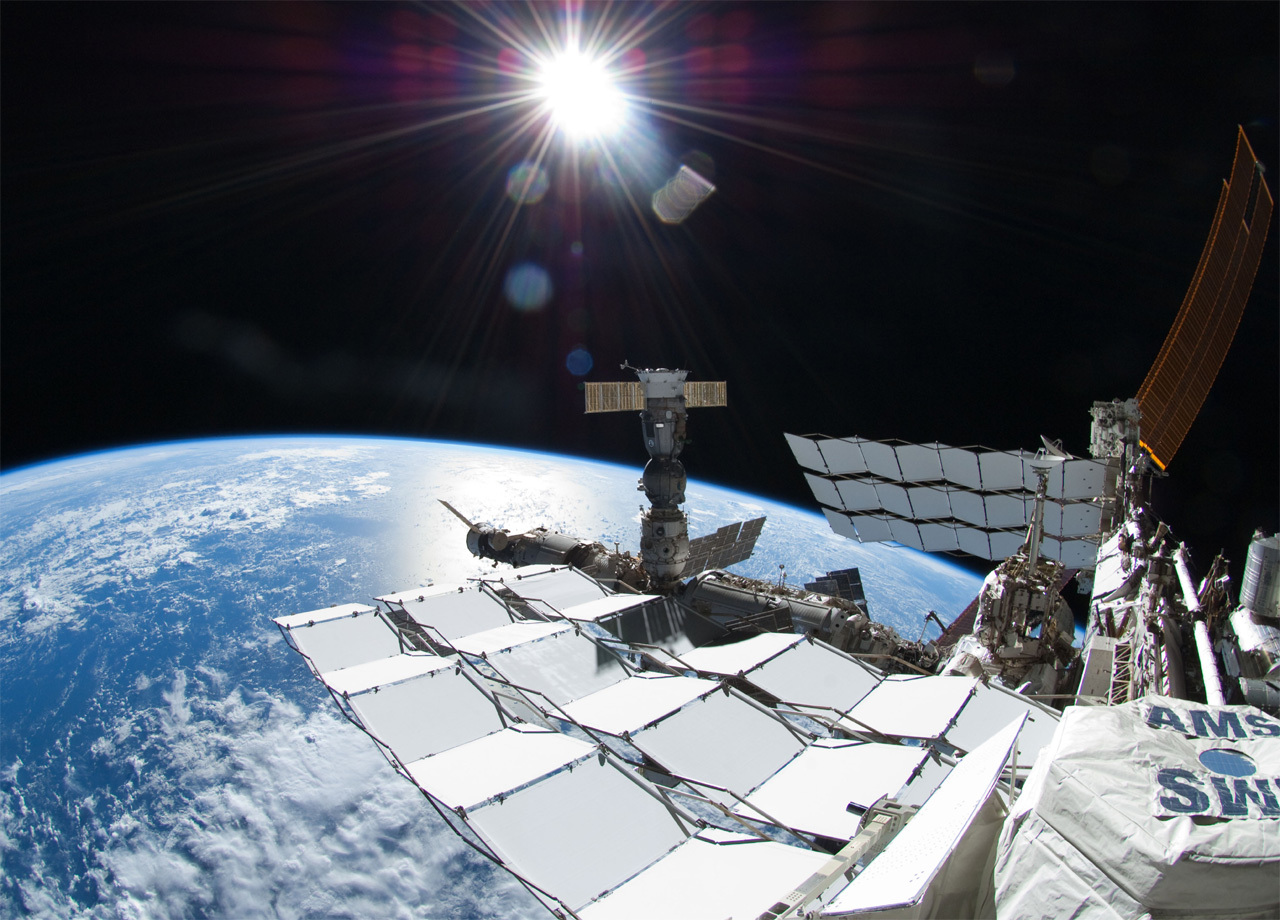 KENNEDY SPACE CENTER, Fla. - The Atlantis astronauts put in a final day of logistics transfer work Sunday, working through off-duty time to finish moving a last few items into the Raffaello multi-purpose logistics module for return to Earth. If all goes well, the cargo module will be detached from the station's forward Harmony module and mounted back in the shuttle's payload bay early Monday, setting the stage for the ship's final departure from the lab complex Tuesday morning.

The primary goal of the 135th and last shuttle mission was to deliver five tons of supplies and equipment to the space station, including more than 2,600 pounds of food. Combined with logistics scheduled for delivery aboard Russian Progress supply ships, the lab complex should be able to support a full-time crew of six through 2012.

"They reached a key milestone today in that the Raffaello logistics module was closed out, all the cargo that (came) up to space station has been transferred over, that was actually completed a couple of days ago, and today they've packed Raffaello with all the return cargo that's going to be coming back to Earth," said space station Flight Director Chris Edelen.

The cargo transfer work ended with an inventory review to make sure everything was in its proper place and that nothing had been overlooked.

"The next item is on resupply, page 48, that's in your end cone tab, that's just the end cone bungie jail, and I'll show that complete since you packed all the bungies together as a block," Jeremy Owen, assembly and checkout officer, called from mission control in Houston.

"And I concur, those are all gone," astronaut Sandra Magnus, the mission loadmaster, confirmed.

They two then reviewed paperwork listing the supplies and equipment moved from the space station to Raffaello for return to Earth.

"Thanks, Sandy, for standing by and letting us cross all the T's and dot all the I's down here," Owen said, wrapping up the cargo transfer review. "We're showing you fully complete with MPLM transfer. With all that, we should be go for MPLM hatch closure in the morning. And I just want to pass on a couple of more words to you, that this wraps up 10 years of MPLM supplying the space station with cargo and resupply items. It's brought up over 50 tons of internal cargo and we've returned over 20 tons of cargo."

"That's a pretty impressive number, because we don't really have another way to get large amounts of cargo to the ground," Magnus replied. "So the MPLMs have served us well and they've been incredible workhorses for the program here and International Space Station in particular. I agree completely."

"And of course, hats off to you and your crew," Owen said. "You guys have done an outstanding job. Of course, there's a little bit left to do for tomorrow, but that's nothing compared to the job you guys have already done."

"Well, it definitely was challenging, but everybody pitched in and of course, we had a good plan," Magnus said. "If you guys wouldn't have done such a good job, and the folks at KSC (Kennedy Space Center) getting stuff packed and keeping track of all the small things, it would have been a nightmare for us. But it really did go smoothly for all that we were working really hard, and we can't even tell you how much we appreciate all the work you guys did on the ground planning this out."

"Well, I can honestly say we enjoyed it in some weird way," Owen said.

Using the space station's robot arm, Raffaello will be disconnected from the station Monday starting around 6:49 a.m. EDT (GMT-4) and mounted back in Atlantis' cargo bay. A few hours later, Magnus, shuttle commander Christopher Ferguson, pilot Douglas Hurley and Rex Walheim will bid the station crew farewell and move back aboard the shuttle, sealing the hatches between the two spacecraft for the last time.

Undocking is scheduled for 2:28 a.m. Tuesday, setting the stage for the shuttle program's final re-entry and landing around 5:57 a.m. Thursday at the Kennedy Space Center. Forecasters are predicting favorable weather, although they are monitoring the development of a tropical system due east of Melbourne, Fla.

In a bit of good news for the shuttle crew, a detailed analysis of general purpose computer No. 4, which unexpectedly shut down Thursday, shows the machine is healthy and in good shape for undocking and re-entry.

"In this morning's handover to the orbit one team, the data processing systems officer here in mission control reported to (shuttle) Flight Director Kwatsi Alibaruho that the analysis of the data dumped from general purpose computer number four indicates that all of its software has been exonerated from any complicity in the unexpected shutdown of that GPC Thursday afternoon," said Rob Navias, the mission control commentator.

"Yesterday, GPC-4, which had been reloaded with software and reactivated on Friday, ran for several hours to perform some diagnostics and to provide additional data for the data processing experts to analyze. GPC-4 is considered to be a healthy computer, it's in good shape. The final analysis indicates that it's unexpected shutdown was simply a hardware transient and it is up and running in good shape."

Systems management software was reloaded into GPC-4 early today. GPC-1 is running guidance, navigation and control software while GPCs 2 and 3 are in standby mode, available for use as needed.

"So good news, GPC-4 in good shape," Navias said. "Although it will be watched in the days ahead, it should be fully available or entry and landing of Atlantis in the pre-dawn hours next Thursday."