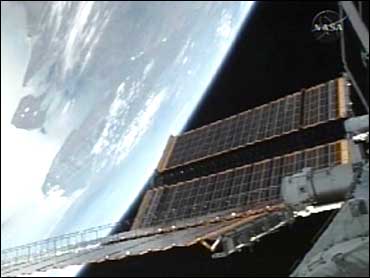 To NASA's relief, both wings went out smoothly, one at a time. Nothing hung up, and none of the panels stuck together like they had on previous panels.

The wings stretched more than 240 feet, a glistening golden hue in the sunlight and a dazzling sight for the astronauts and everyone else involved.

"It's just really amazing," said Mike Fincke, the space station's skipper. He said there was "a shout of triumph" aboard the linked station-shuttle complex once the two wings were fully extended.

Dan Hartman, chairman of the space station mission management team, said, "It was a truly fantastic day in space. The international space station team and its partnerships are on cloud nine with the completion of the integrated truss assembly as well as the finalization of our electrical power grid on the space station. It took years to get here. We had some struggles along the way, but it's a major accomplishment for NASA and the partnership team."

The work was a highlight of shuttle Discovery's mission. Completed 220 miles above Earth, the new panels are the final pair of electricity-generating wings and should boost the amount of science research at the orbiting outpost.

The long, deliberate procedure began the morning after this last set of solar wings was hooked up to the orbiting complex.

Right on cue, astronaut John Phillips pushed the button that commanded the first wing to start unfurling. It slowly stretched out like a folded-up map. When the wing was halfway open, Phillips stopped the motion for nearly an hour so the panels could soak up sunlight and be less likely to stick.

The second wing, which had been boxed up for years, opened just as easily. A slight crinkle was spotted near the bottom, but flattened when the wing was stretched out.

Most if not all the astronauts watched the wings unfold, peering out windows and through camera lenses, ready to hit the "abort" button in case of trouble. 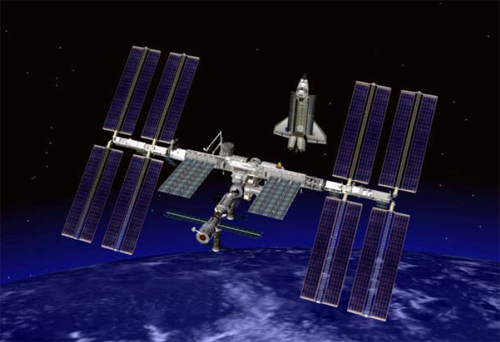 Flight controllers as well as managers anxiously monitored everything, given the past problems. The last time a solar wing was unfurled in 2007, it caught on a guide wire and ripped. Emergency spacewalking repairs were needed to fix it.

"We learned from that and made it very smoothly," Fincke said.

After 10 years of assembly, the space station now has eight full wings. Altogether, the wings will be capable of generating enough electrical power for about 42 large houses, according to NASA.

CBS News space consultant Bill Harwood reports that NASA managers, thrilled at the successful deployment of a fourth and final set of solar arrays today, approved a revised flight plan that will slightly delay the shuttle Discovery's undocking, to improve the odds of getting critical experiment samples back to Earth.

"End of mission remains ... a week from tomorrow," Cain said. "The difference is the option we settled on will allow us a little bit more time during the docked phase for the crew to take advantage of some other work, including transfers and other items. It'll result in the hatch closure and undocking occurring on the same day, on flight day 11. It kind of optimizes the docking timeline and gives us a little bit of margin."

Cain also said Discovery's heat shield is in good shape. A detailed assessment based on launch imagery, an inspection by the crew in orbit and a photo survey carried out by the station's crew during Discovery's final approach revealed only a few relatively minor problems.

"As far as the thermal protection system, we've essentially cleared the vehicle for all intents and purposes," Cain said. "We haven't officially made that determination in the Mission Management Team because there is one item of interest that is outstanding, but it's not going to be an issue for us in terms of being able to execute a safe deorbit and landing of Discovery."

Along with a damaged tile on Discovery's left inboard elevon, or wing flap, close-up photography also revealed a protruding gap filler, a thin spacer used to keep adjacent tiles from rubbing against each other. The damaged tile is not considered a problem and protruding gap fillers have been seen on other shuttle flights. This one, at the back of the shuttle, is not believed to be a problem.

Aboard the international space station, the astronauts checked out the tools and equipment they will need for a spacewalk Saturday while Sandra Magnus worked to install a replacement distillation centrifuge carried up by Discovery for the station's urine recycling system.

The water recycling system is critical to NASA's long-range plans to support six full-time astronauts aboard the outpost. The system is designed to convert condensate and urine into clean water for drinking, personal hygiene and oxygen generation.

But when the system was activated late last year, engineers ran into problems with the vacuum distillation assembly, a critical component that features a high-speed centrifuge. A new DA was flown up aboard Discovery and engineers hope to activate it over the weekend.