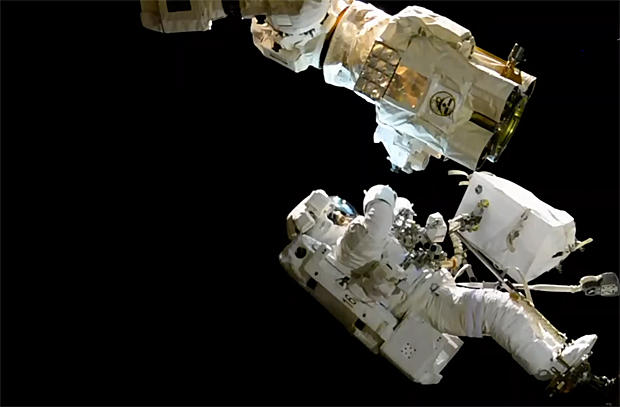 The only items the crew missed were two low priority get aheads, the attachment of a handling fixture on a spare radiator assembly to make it easier to move later and bolt adjustments on another piece of backup gear.

But all of their primary tasks were accomplished, including replacement of a fuse in a payload carrier used by an appendage of the robot arm and work to rig several spare components for quick access if they are ever needed.

Floating in the Quest airlock, station commander Randy Bresnik and Joe Acaba switched their spacesuits to battery power at 7:47 a.m. EDT to officially kick off the year's tenth spacewalk, the third in the past two weeks.

The spacewalk originally was planned for Wednesday, but it was delayed two days after engineers discovered a camera-light assembly on the robot arm grapple fixture that was installed during an Oct. 5 spacewalk was not focusing properly. The camera provides the bird's eye view needed for the arm to capture visiting cargo ships and other components.

Acaba, anchored to the end of the robot arm, first installed a new high definition camera on the lower right side of the station's long power truss.

While Acaba was setting up the arm for the camera installation, Bresnik replaced the fuse in the robot arm payoad carrier and then brought out a replacement safety tether after loose stitching was seen on one of the redundant tethers securing Acaba to the station.

Getting the insulation out of the way will enable the robot arm to grapple either unit down the road if failures occur and the spares are needed as replacements.

After installing the new HD camera, Acaba got off the arm, anchored himself to a foot restraint on the truss and removed the camera assembly on the robot arm grapple fixture, known as a latching end effector, or LEE.

After removing the degraded camera, Acaba installed a replacement that he carried outside earlier. Engineers powered up the arm and the camera worked as expected.

Acabs then used a grease gun to lubricate the grapple mechanism, work that was started during the Oct. 5 spacewalk. Toward the end of the work, flight controllers noticed a handle on Acaba's emergency jetpack had popped open.

The nitrogen-powered jetpacks worn by all NASA spacewalkers are designed to allow an astronaut to "fly" back to station if he or she somehow got disconnected from safety tethers. Acaba was firmly tethered throughout, and he was told to complete the lubrication work before heading back to the airlock.

Repressurization began at 2:36 p.m., closing out a six-hour 49-minute spacewalk.

This was the 205th EVA devoted to station assembly and maintenance since construction began in 1998, the fifth overall for Bresnik and the third for Acaba. One hundred and 24 astronauts and cosmonauts representing 10 nations have now logged 1,278 hours and 25 minutes of station EVA time, or 53.3 days.

A warning about computers in the classroom