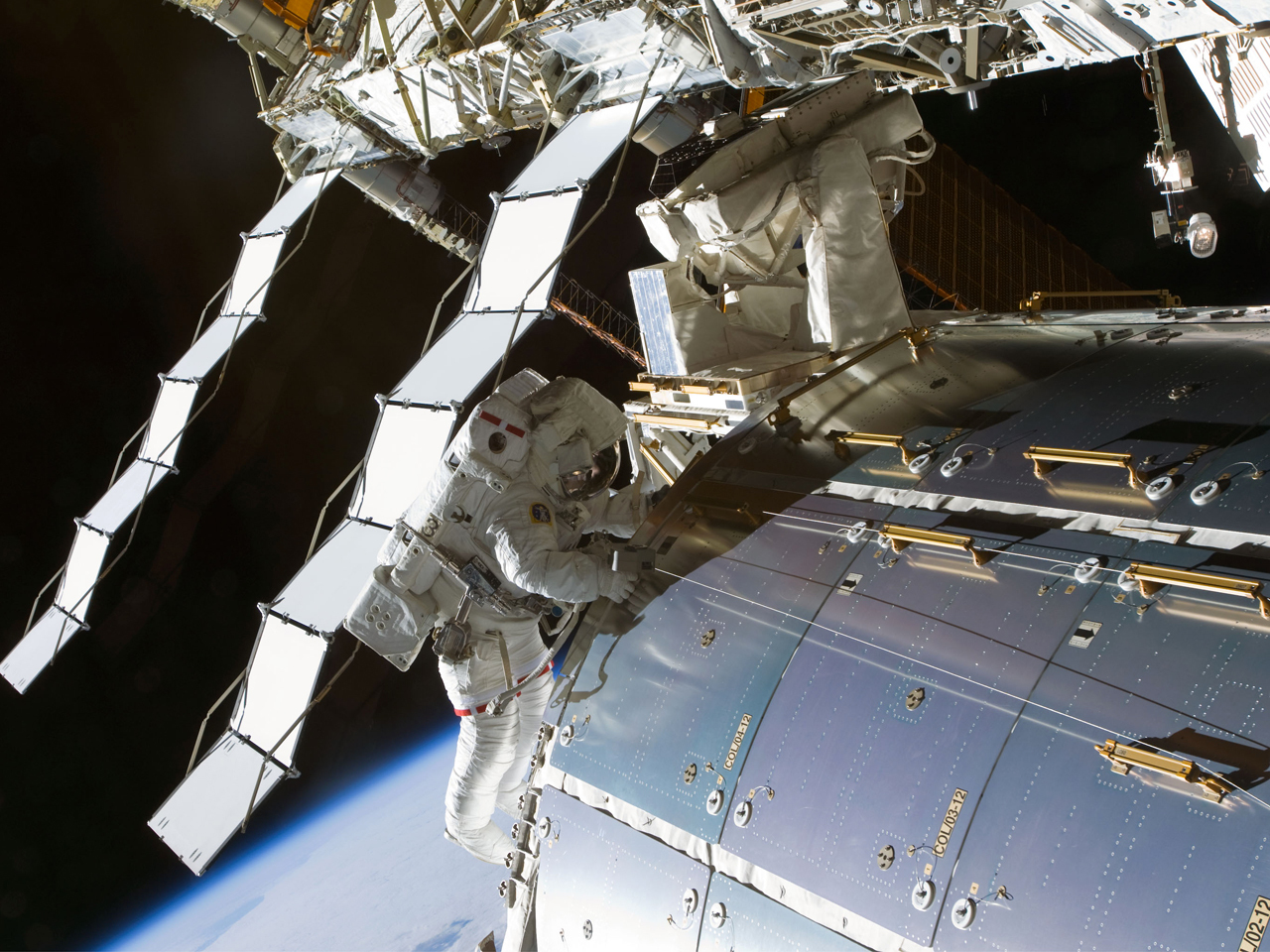 Pending final approval, two NASA astronauts are gearing up to venture outside the International Space Station Saturday for a hurriedly planned spacewalk to look for the source of an ammonia coolant leak in the Iab's left-side solar power truss, NASA officials said early Friday.

"We are absolutely, 100 percent ready for the EVA," station commander Chris Hadfield told flight controllers shortly after wakeup Friday. "I think it's really smart the way we're all proceeding here. It's the right thing to do, and everybody on board is gearing up for it."

Astronauts Thomas Marshburn and Christopher Cassidy planned to spend much of the day preparing their spacesuits, charging batteries and reviewing spacewalk procedures. Assuming final clearance by NASA managers later Friday, they will venture out of the Quest airlock module around 8:15 a.m. ET Saturday and move out to the far left end of the station's solar array truss to look for the source of the leak.

Located in the outboard port-six (P6) solar array truss segment, the leak was reported by the station crew around 11:30 a.m. Thursday. Hadfield said they could see "a very steady stream of flakes or bits coming out."

The leak is in the system used to cool electronics associated with solar array power channel 2B, one of eight fed by the station's huge solar panels, four on each end of the truss. Ammonia flowing through radiators at the base of each set of arrays is used to carry away the heat generated by the power system's batteries and other electronics.

The coolant system requires at least 40 pounds of ammonia to operate normally. Based on the observed leak rate, the channel 2B coolant loop was expected to drop below that level sometime Friday. Flight controllers told the crew they would reconfigure the system to provide as much cooling as possible from the channel 2A loop.

"We're now expecting the loop to shut down within 24 hours," astronaut Douglas Wheelock radioed the crew Thursday from mission control. "And after the loop shutdown, the loop will continue to leak out and, of course, the rate will slow as the loop pressures decrease.

"We're pulling together a plan now, a power plan, where we're going to try to tie as much as we can from the channel two bravo and two alpha together so that we can move some of the 2B loads to the 2A (loop). We plan to do that power reconfiguration (Friday) in advance of the loop shutdown."

While the crew will lose redundancy in the cooling system, flight controllers do not believe any major systems will have to be shut down to reduce cooling requirements. But cooling is critical to station operations and, late Thursday, mission managers told the crew to begin gearing up for a spacewalk to help pin down the location of the leak.

The spacewalk timeline is not yet final, but Cassidy and Marshburn presumably will inspect and photograph the area and possibly remove a coolant system flow control valve assembly near the observed location of the leak. If an obvious problem is seen, the module can be replaced with a spare.

"Busy night on Orbit 3 as the team prepares for an unscheduled EVA on Saturday," flight controller Bill Foster said in a Twitter posting. "Not a threat to the crew, fortunately."

The leak occurred at a particularly busy time for the station crew as Marshburn, Hadfield and cosmonaut Roman Romanenko prepare to return to Earth late Monday aboard a Russian Soyuz ferry craft to close out a 146-day stay in space.

A NASA spacewalk requires two U.S. crew members, and with the Soyuz departure, the lab will be staffed by just one - Cassidy - and two cosmonauts, Pavel Vinogradov and Alexander Misurkin.

Flight controllers told the crew late Thursday that the Soyuz departure was expected to remain on track Monday despite the leak and the unplanned spacewalk.

"Once it's done, the shutdown in anticipation of it bleeding out, are we going to be in a good, stable, long-term config so that we can just undock as planned?" Hadfield asked.

"And, Chris, we don't have the full plan for the long-range power down, but ... we don't see anything technically that we can't overcome with the undocking," Wheelock replied. "But we are still getting our arms fully around that issue."

This is not the first time a leak has been observed in the channel 2B system.

A slight 1.5-pound-per-year leak in the channel 2B cooling system was first noticed in 2007. During a 2011 shuttle visit, two spacewalking astronauts added 8 pounds of ammonia to the reservoir to boost it back up to a full 55 pounds. The plan at that time was to top off the system every four years or so to "feed the leak," replacing the lost ammonia as required.

But over the next few months, engineers saw the leak rate suddenly quadruple, either because something changed at the original leak site or, more likely, because another leak developed elsewhere in the system.

On the assumption that the leak was in the solar array 2B coolant radiator, astronauts Sunita Williams and Akihiko Hoshide staged a spacewalk Nov. 1, 2012, to reconfigure coolant lines and to deploy a spare radiator, isolating the section of the loop where the leak was suspected.

The system operated normally until Thursday when the crew reported the visible leak. Whether the latest problem is related to the earlier issue is not yet known.

The lion's share of the International Space Station's electrical power comes from four sets of dual-panel solar arrays, two on the right side of a 357-foot-long truss and two on the left side.

Each set of solar arrays features two 115-foot-long panels that extended in opposite directions. The Russian segment of the station taps into the U.S. power grid to supplement electricity generated by two relatively small solar panels on the Zvezda command module.

The two U.S. arrays at the far left end of the station's integrated power truss feed power to electrical channels 2B and 4B. The P6 set of arrays, like its three counterparts, routes power from the solar panels directly into the station's electrical grid during daylight passes, at the same time charging dual sets of batteries that take over during orbital darkness.

Each power channel generates between 150 and 160 volts of direct current, but downstream equipment near the center of the power truss - equipment that uses a separate cooling system - steps that down to 125 volts DC for use by the station's internal systems.

To keep the power generation components cool, each of the four sets of arrays uses two independent coolant loops that circulate ammonia through cold plates to carry heat out to a single shared radiator that extends from each module. The photo-voltaic radiator weighs 1,650 pounds and is made up of seven panels measuring 6 feet by 11 feet.

The space station can operate without the full complement of cooling channels, but the total loss of a coolant loop would require a significant reconfiguration to prevent electrical systems on the affected loop from overheating.