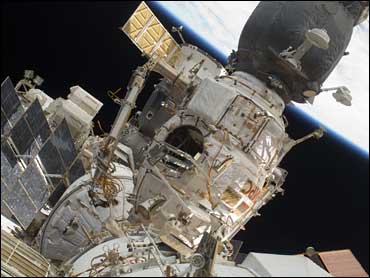 The crew of the international space station had a close call with space junk.

The three astronauts took refuge for 11 minutes Thursday in a Russian escape capsule before returning inside. Officials were worried that the space station might get hit with a piece of space junk.

NASA says the debris was a small piece of an old spacecraft motor and it was passing within three miles of the station.

The piece measured less than an inch but tiny pieces of debris could cause a fatal loss of air pressure in the station. NASA says it isn't the first time they've sent the station crew into the capsule for safety.

But all objects in low-Earth orbit are traveling at 5 miles per second, making impacts potentially catastrophic. A 0.4 inch-wide sphere of aluminum moving at orbital speeds packs the same punch as a 400-pound safe moving at 60 mph, Harwood reports.

The space junk streaked harmlessly past the station around 12:39 p.m. EST and the crew was cleared to re-enter the lab complex.

"OK guys, based on all the confirmations, most likely the object passed us by," a Russian flight controller said, according to a translator.

There are two Americans and one Russian aboard the space station.