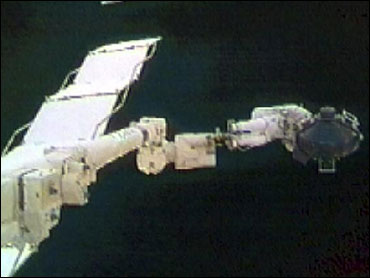 While controllers on the ground debated how to deal with two pieces of high-tech fabric dangling from the shuttle's belly, two Discovery astronauts went for a spacewalk Monday to make repairs on the international space station.

Astronauts Stephen Robinson and Soichi Noguchi spent seven hours exchanging a broken down 660-pound gyroscope, which failed in 2002, with a new one.

"Oh, the view is priceless," Noguchi said as he hitched a ride to Discovery's cargo bay on the outpost's robotic arm. "I can see the moon."

With Robinson's help, Noguchi secured the controller aboard the shuttle and retrieved the new gyroscope for installation. After hours of tedious bolting and unbolting with specialized silver drivers, the pair completed the installation.

"This is just like putting in an airplane engine," said Robinson, a pilot.

"Just wiggling until you get it," Noguchi responded, causing his partner to chuckle.

Both continued bolting and wiggling until the unit was tightly attached.

Their spacewalk came as NASA officials considered what to do about a ceramic cloth, called "gap filler," found sticking out between heat shield tiles in two places on the shuttle's underbelly.

There remains debate among engineers and others over how to handle what would be an unprecedented repair – and whether it is even necessary.

Some engineers worry that the protruding filler could trigger potentially treacherous overheating during re-entry.

"You don't want that to happen because it could effect your safety margin on the shuttle and damage heat shield tiles. You don't want to do that," said CBS News Space Consultant Bill Harwood.

A major fix would involve a spacewalk and a Discovery astronaut cutting off the material that sticks out or yanking out the gap filler altogether, reports CBS News Correspondent Mark Strassmann.

NASA officials stressed that Discovery and its crew could be perfectly safe flying back with the exposed filler. Space shuttles have flown with exposed filler many times before, just not necessarily with such a large protrusion.

One piece is sticking out 1.1 inches. The other protrudes at an angle from six-tenths to nine-tenths of an inch. The general wisdom and flight history indicate that the limit should be a quarter-inch, said flight director Paul Hill

Deputy shuttle program manager Wayne Hale said more technical information is needed and the risks of causing further damage by going underneath the shuttle need to be considered.

"We certainly don't want to make the situation worse than it is," he said. "My immediate knee-jerk reaction was that we can live with this. On the other hand, this is bigger than we have seen before."

In 24 years of shuttle flight, astronauts have never ventured beneath their spacecraft in orbit and have made few repairs to their ship.

But if NASA's spacewalking specialists can come up with an easy fix, Hale says correcting the problem may be worth eliminating concern about flying home with the protrusions.

"Why would you not just go take care of it?" he asked. "Why should I lose sleep over these gap fillers if we can take care of them that easy?"

The tools are aboard Discovery and the crew has already been trained how to cut the fillers, Poulos said. The filler keeps the shuttle's thermal tiles from damaging one another as the spacecraft heats up during re-entry and its protective thermal layer shifts.

"I certainly think the jury is out at this point as to whether or not we will do anything," he said.