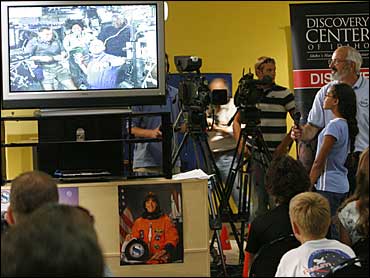 Teacher-astronaut Barbara Morgan transformed the space shuttle and space station into a classroom Tuesday for her first education session from orbit, fulfilling the legacy of Christa McAuliffe with joy and also some sadness.

"I've thought about Christa and the Challenger crew just about every day since 20-plus years ago," Morgan said in a series of interviews right before class got under way. "I hope that they know that they are here with us in our hearts."

Morgan, 55, who was McAuliffe's backup for the doomed 1986 flight, got her first opportunity to talk with schoolchildren late Tuesday afternoon, almost halfway through her two-week mission.

The youngsters were assembled at the Discovery Center of Idaho in Boise, less than 100 miles from the elementary school where Morgan taught before becoming an astronaut. Morgan's two sons, now teenagers, attended inventors' camp there years ago.

One child wanted to know about exercising in space. In response, Morgan lifted the two large men floating alongside her, one in each hand, and pretended to be straining. Another youngster wanted to see a demonstration of drinking in space. Morgan and her colleagues obliged by squeezing bubbles from a straw in a drink pouch and swallowing the red blobs, which floated everywhere. The four astronauts also used ping-pong balls and a softball for props.

Morgan was asked how being a teacher compared to being an astronaut.

The 25-minute question-and-answer session was a welcome diversion for NASA, which found itself trying to explain — again — why foam insulation was still falling off shuttle fuel tanks more than four years after the Columbia disaster.

The gouge in shuttle Endeavour's belly is not considered a threat to the crew, but NASA was debating whether to send astronauts out to fix it in order to avoid time-consuming post-flight repairs. Any structural damage to the area resulting from the more than 2,000-degree heat of atmospheric re-entry would take weeks if not longer to repair.

All the testing and analyses are expected to be completed by Wednesday.

"Space flight is a risk management process," former NASA astronaut Tom Henricks told CBS' The Early Show about the challenges facing the Endeavour crew should they make the repairs.

"There is nothing routine," he said.

"My understanding is that it's really not a safety issue for us on board. There isn't a whole lot of concern on board right now."

Indeed, business went on as usual aboard the joined shuttle-station complex Tuesday. Morgan and her colleagues removed a platform from Endeavour's payload bay and attached it to the international space station, where it will be used to hold large spare parts.

A special team of astronauts and specialists spent a second day Tuesday mapping out what would be the best way to proceed, if repairs are ordered. Most likely, two astronauts would be maneuvered on the end of Endeavour's 100-foot robot arm and extension boom to the difficult-to-reach spot, and apply a black paint and caulk-like goo to the damage.

A sliver of the gouge, which is 3½ inches long and 2 inches wide, penetrates all the way through two thermal tiles, exposing the thin felt fabric that is the final barrier before the shuttle's aluminum frame.

Any repairs would be conducted during the shuttle's fourth spacewalk, scheduled for Friday. If more time is needed to get ready, NASA would consider keeping the shuttle at the station even longer and bump the spacewalk to Saturday.

Even though the repair itself would be relatively simple, the astronauts would be wearing 300-pound spacesuits and carrying 150 pounds of tools that could bang into the shuttle and cause even more damage.

"I've been really interested in it but I think NASA's doing the right thing," said Morgan's husband, Clay. "I don't want them to send someone down to try and fix it unless that makes it safer."

NASA is uncertain whether foam, ice or a combination of materials broke off Endeavour's external fuel tank during last Wednesday's liftoff. The debris — about the size of a baseball — peeled away from a bracket on the tank, fell against a strut lower on the tank, then shot into the shuttle's belly.

These brackets repeatedly have shed foam but caused little if any damage until now. NASA is redesigning the brackets, but the new ones won't be ready until next year.