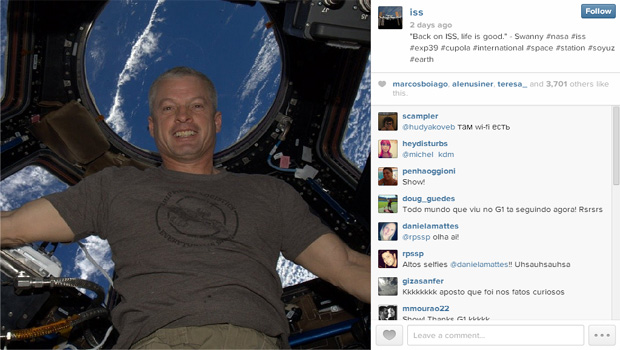 American astronaut Steven Swanson marked a small tech milestone this week with the first Instagram selfie in space. Swanson took not one, but two pictures of himself on the International Space Station and posted them to the ISS Instagram account.

Prior to Swanson's out-of-this-world selfie, the account -- begun in January -- only had 12 photos of the astronauts' preparation before their launch on March 24.

The Instagram selfie adds to a growing list of cosmic social media postings since May 12, 2009, when American astronaut Mike Massimino made social media history with the first Tweet from space.

Since then, others including astronaut Karen Nyberg have joined in on the social media fun, posting stunning photos of Earth while orbiting around the planet, or sharing their spacewalk experiences with the Twitterverse.
Perhaps one of the most popular posts from space was Canadian astronaut Chris Hadfield's YouTube video of David Bowie's "Space Oddity," which went viral -- with over 21 million views and counting: