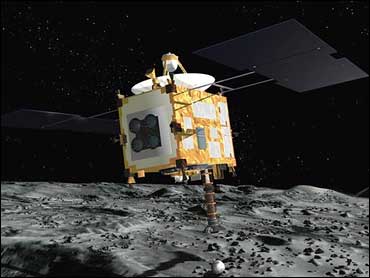 A Japanese space probe is showing signs of trouble after it apparently landed on an asteroid Saturday and collected surface samples in an unprecedented mission to bring the extraterrestrial material back to Earth, officials said.

The Hayabusa probe, hovering about three miles from the asteroid, appeared to be shaking due to a possible gas leak from a thruster, said spokesman Atsushi Akoh of Japan's space agency, JAXA.

JAXA will put Hayabusa into "safety mode," which stabilizes the probe by turning its solar panels toward the sun, for two to three days to investigate, Akoh said.

Communications between the probe and the control center near Tokyo were stable, he said.

JAXA announced earlier Saturday that Hayabusa appeared to have touched down for a few seconds on the asteroid, about 180 million miles from Earth, to collect powder from its surface before lifting off again to transmit data to mission controllers.

But the agency won't know for sure if Hayabusa collected surface samples until it returns to Earth. It is expected to land in the Australian Outback in June 2007.

If all goes well, it will be the first time a probe returns to Earth with samples from an asteroid, according to JAXA. A NASA probe collected data for two weeks from the asteroid Eros in 2001, but did not return with samples.

Hayabusa's feat "contributes greatly to the exploration of space by mankind," Iwao Matsuda, the state minister in charge of science and technology, said in a statement issued Saturday.

The landing on the asteroid was Hayabusa's second, following a faulty touchdown days earlier. JAXA lost contact with the probe during that attempt and didn't even realize it had landed until days later, long after it had lifted off.

The space agency hopes that examining asteroid samples will help unlock the secrets of how celestial bodies formed, because their surfaces are believed to have remained relatively unchanged over the eons, unlike larger bodies such the planets or moons.

Hayabusa fired a metal projectile shortly before 8 a.m. Japan time, suggesting that the asteroid had landed and collected the dust that was kicked up. The whole procedure was over in a matter of seconds, as planned.

"It is only a very small amount of material, powder really," Yashiro said.

Hayabusa was launched in May 2003 and has until early December before it must begin its journey home.

On top of recovering samples from the Itokawa asteroid, the probe is also testing a new type of ion engine that uses an electric field to accelerate positive ions to a high velocity. It swung by Earth for a gravity assist that propelled the probe toward Itokawa, JAXA said on its Web site.

JAXA hopes to use the fuel-saving technology in missions farther into outer space, the Web site said.

The Hayabusa mission is part of Japan's efforts to expand its space exploration program. Earlier this year, JAXA said it would send its first astronauts into space and set up a base on the moon by 2025.

But the agency has recently suffered a series of setbacks. A moon probe originally scheduled for launch in 2005 has been delayed, while the agency abandoned a mission to Mars two years ago after a probe moved off course.

The explosion of a domestically designed H-2A rocket after a failed launch in November 2003 also shook confidence in the country's space program.

Meanwhile, neighboring China has put astronauts in space twice since 2003, only the third country to send a human into orbit on its own after Russia and the United States. Beijing has said it will send three more astronauts into space as early as 2007.