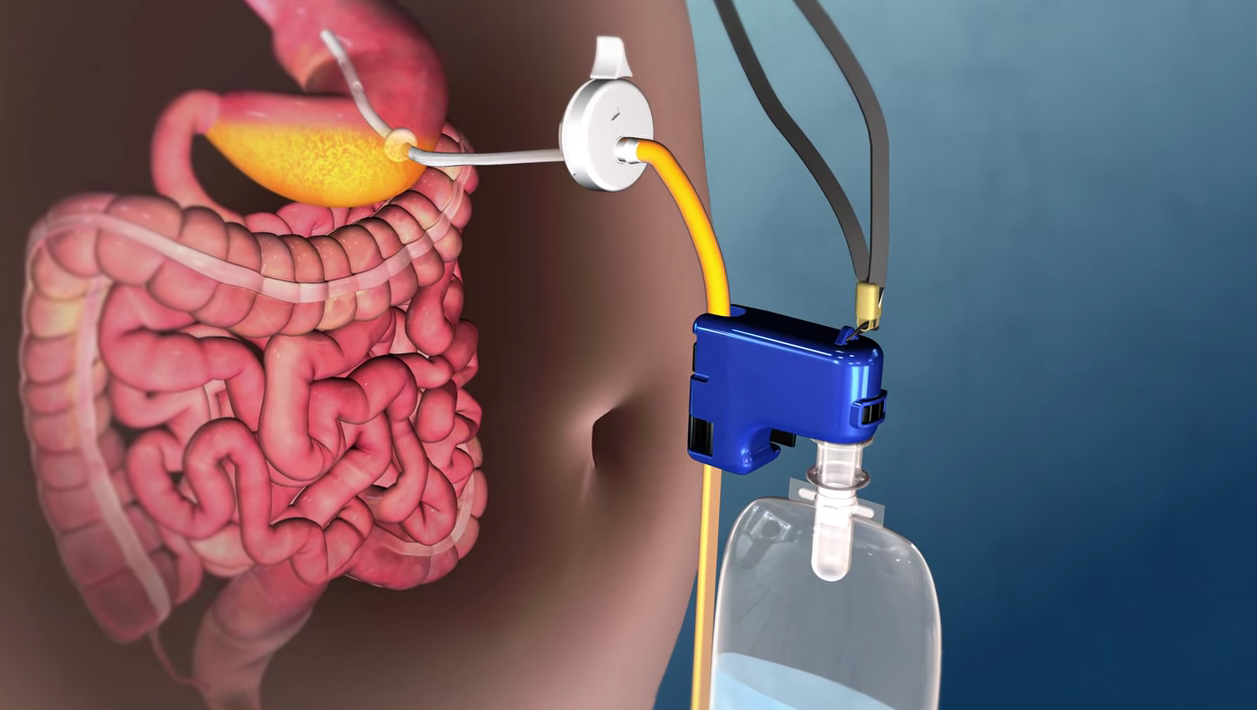 A device meant to help severely obese people lose weight is turning stomachs among some weight-loss experts in the medical community.

This week, the U.S. Food and Drug Administration approved the AspireAssist device, which involves an outpatient procedure using anesthesia during which a tube is surgically inserted into a patient's stomach through a small incision in the abdomen.

A disk-shaped "port valve" that's connected to the tube lies outside the body, against the belly. Twenty to 30 minutes after a meal is eaten, the patient attaches the device's external connector and tubing to the port valve, opens the valve and drains the contents. It takes about five to 10 minutes to drain food matter through the tube and into the toilet. The device removes approximately 30 percent of the calories consumed.

While the FDA said in a statement that the device should not be used on patients with eating disorders, it leaves some wondering if it is actually a medically approved form of bulimia.

"I heard about this device about a year or two ago at one of our meetings and I was shocked," Dr. Sajani Shah, a minimally invasive and bariatric surgeon at Tufts Medical Center, told CBS News.

"It's like giving someone bulimia," she said. "Basically, you can just vomit out this tube."

Dr. Mitchell Roslin, chief of weight-loss surgery at Lenox Hill Hospital, in New York City, said in an email, "The Aspire device is an option that elicits a strong visceral response."

He added, "This will not be attractive to most patients."

The external drain may turn patients off and could carry social stigma and other issues, he said. "The suctioned food, or sulcus, is similar to vomit. I think that this would be a deal breaker for most young active adults."

The FDA said the device is meant to help weight-loss efforts in obese adults 22-years-old and up who have a body mass index (BMI) of 35 to 55, and who've failed to achieve and maintain weight loss through non-surgical means, the government agency said.

"The AspireAssist approach helps provide effective control of calorie absorption, which is a key principle of weight management therapy," said the FDA's Dr. William Maisel, in the statement.

A company video illustrates how the device works:

Patients need to be followed up closely by their doctor and placed on a lifestyle program that helps with healthy eating habits, added Maisel, deputy director for science and chief scientist in the FDA's Center for Devices and Radiological Health.

The device maker, Aspire Bariatrics, is based in King of Prussia, Pennsylvania, and features happy-looking people on its website offering their testimonials. One woman appears to be jogging, another normal-weight man is strolling on the beach smiling.

One young, slender man who lost 110 pounds is pictured outdoors by a lake, among pine trees, smiling, with a quote that reads: "The AspireAssist hasn't just changed my body, it's changed my state of mind."

But despite the positive testimonials, Tufts' Dr. Shah said anyone who works with severely obese patients understands that they are coping with a whole host of issues already -- psychosocial and behavioral, among others -- and this device could set them up for an even more difficult relationship with food.

Elisabetta Politi, nutrition director at Duke University Diet and Fitness Center, said, "I think that going to the bathroom to empty your stomach contents is something that will create really strong emotions, and having to do it three times day, looking at your digested food... The day-to-day commitment with this procedure makes me wonder about it."

But Politi, who works with severely obese patients every week, said some people who carry hundreds of pounds of extra weight might find relief if they can tolerate the requirements involved.

The clinical trial for the device showed it worked, but some patients couldn't tolerate it.

Dr. Michael Jensen, a professor of medicine at Mayo Clinic, was an investigator for the clinical trial.

"I would say that 90-plus percent of people have the reaction, 'It's yuck, I wouldn't do that for any amount of money,''' he said.

Mayo recruited 20 patients who made it through the study wearing the device, and 10 control group patients who didn't use it. All received lifestyle counseling.

"My patients with the tube found it a difficult burden to use it three times a day the way you're supposed to. Number one, you had to chew food very thoroughly, otherwise it wouldn't be sucked out. Then they had to wait 30 minutes, then hook up this device and empty it out which is a good 5 to 15 minutes. For a whole year," said Jensen.

A number of patients (not among those 20) dropped out of the study, he said. "We had some who hardly used it. And we had someone with a tube in the side and within four weeks decided they were going to go swimming in the Mississippi River and of course they got an infection and we had to take the tube out."

Some parents of young children asked for it to be removed. "I had a couple of patients with little kids, really little, and they said, 'This is freaking my kids out,'" Jensen said.

The device is not without side effects, according to the FDA, including: occasional indigestion, nausea, vomiting, constipation and diarrhea. The endoscopic procedure performed to place the gastric tube also has risks, including sore throat, pain, abdominal bloating, bleeding, infection, nausea, vomiting and death.

Risks related to the abdominal opening for the port valve include abdominal discomfort or pain, irritation, hardening or inflammation of the skin around the site where the tube is placed, leakage, bleeding and/or infection.

Still, the FDA gave approval because there are probably some people for whom this might be the best or only option, some of the experts interviewed said.

"It will be important to study its real-world effectiveness and safety, as well as cost-effectiveness, as it enters clinical practice," Dr. William Yancy, director of the Duke Diet and Fitness Center, told CBS News.

Lenox Hill's Dr. Roslin said, "I expect many strong moral reactions to this device. It does push the limits that people will go to for weight loss. Some will say, 'I can still enjoy eating and lose weight.' But, there will be strong social stigma and issues."