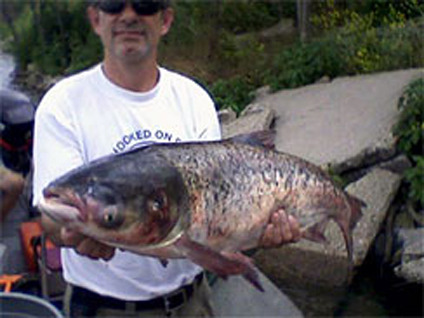 Late Wednesday, an Asian carp was caught in Lake Calumet, about six miles from Lake Michigan. That set off alarms. Michigan U.S. Sen. Debbie Stabenow made headlines when she called for the deployment of poison to keep Asian carp out of the Great Lakes. Unfortunately, they may already be there. Politicians like Stabenow are willing to turn to unconventional warfare against this invader because this is a very unconventional sort of fish, one that could devastate a $7 billion regional fishing industry.

Common carp were first brought to the United States in 1831 and rapidly flourished in the Upper Mississippi River System. In the 1960s and 1970s, southern fish farmers imported two species of Asian carp -- the bighead and silver - thinking they might help improve the water quality of aquaculture ponds by cleaning out algae. But it didn't take long before the fish spread north. Flooding in the early 1990s resulted in many catfish farm ponds overflowing their banks. Some Asian carp got released into local waterways feeding into the Mississippi River basin and the rest, as they say, is history.

Last year, the Army Corps or Engineers finding traces of the Asian carp only a few miles away from Lake Michigan - this despite the presence of an advanced barrier system which cost millions to construct.

By any measure, this is a voracious invader When it comes to chow time, Asian carp have the muscle to get their way as they can eat up to 40 percent of their body weight daily and grow as large as 100 pounds. By way of anecdote, researchers investigating carp populations in the upper Mississippi a few years ago described the difficulty of catching Asian carp with the usual sampling gear.

"For example, they are often seen breaking the water surface many meters ahead and along the sides of our electrofishing boats. Asian carp have often entered our boats without the use of dip nets. In fact, many of our staff members have been hit multiple times by large jumping fish."

Mapping out a battle plan has been fraught because of political divisions in the Great Lakes region. Illinois fought a request by Michigan to shut down close the locks on the Chicago Sanitary and Ship Canal. (In the end, Michigan's request was turned down.

It so turns out that carp also is used in the preparation of gefilte fish, a Jewish delicacy popular during Passover. That has raised suggestions among some looking for a positive takeaway that perhaps a carp invasion might create a new market, including the possibility of holiday exports to Israel. But scientists are less enthusiastic. In 2007, the U.S. Department of the Interior declared Asian carp to be an invasive species.

As for Stabenow's proposal, let's note that something similar was tried earlier. In 2009, Illinois carried out what was the largest organized fish kill in the state's history when boats dumped poison into the Chicago Sanitary and Ship Canal in a bid to stop the carps dead in their tracks.

$3 million and three days later, officials were able to identify one dead carp, amid tens of thousands of dead fish.