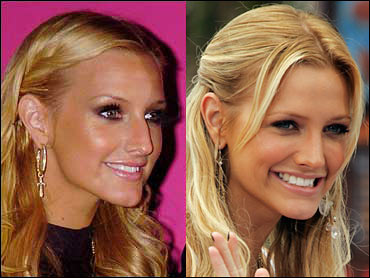 Ashlee Simpson is laughing off rumors that she had a nose job — but she's not denying it, either.

Recent photos splashed across the Internet and in tabloids suggest the multiplatinum singer has made an alteration to her profile, removing the bump that made her nose distinctive.

When asked about the speculation during a phone interview with The Associated Press on Wednesday, Simpson giggled and said: "Everybody's already saying it, so I just don't talk about it. I'm like, OK, whatever. It doesn't bother me."

But when asked whether the rumor was true, the 21-year-old singer didn't confirm or deny it, but just giggled more.

Simpson — the younger sister of Jessica — is about to launch a summer tour in June. Her latest album is "I Am Me"; her first album, "Autobiography," was released in 2004 and sold 3 million copies.