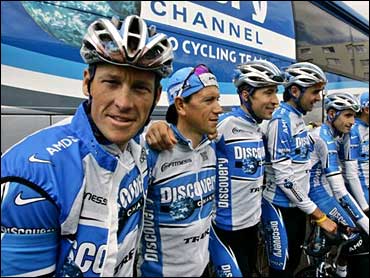 France The Tour de France got underway Saturday as Lance Armstrong started his quest for a seventh straight title before retiring from cycling.

First to start the opening stage was French rider Ludovic Turpin, who set off under gray skies and moderate winds in the 11.8-mile time trial from Fromentine to Noirmoutier-en-l'Ile.

Armstrong can strike an immediate blow in his bid for a seventh Tour crown. Victory in the time trial, or even a quicker time than his main rivals, would send a clear message that he is still the man to chase.

However, a below-par performance would give fresh hope to the likes of Jan Ullrich, Alexandre Vinokourov and Ivan Basso, whom Armstrong rates as his main challengers.

Armstrong and Ullrich have both studied the course.

But Ullrich already ran into trouble.

The 1997 Tour winner and five-time runner-up crashed into the back of his T-Mobile team car Friday when he failed to spot a warning sign to brake. He fell forward through the back window and sustained minor cuts to his neck, but is expected to take the start line.

He appeared later in the day when all the teams were presented and did his best to look cool and confident.

"Jan is an excellent rider and he gets better as the Tour goes on," Armstrong said, adding that Ullrich's team appears slick and menacing. "They have three riders who have already been on the podium. We expect them to be very tough."

The rider from Kazakhstan finished third in 2003, excelling in the mountains by relentlessly attacking Armstrong. He is desperate to make a similar impression after missing last year's race because of an injury. Ullrich's German countryman Andreas Kloeden didn't really come close to beating Armstrong last year, but his second-place finish was commendable.

Ullrich tried to stay with him, but finished second behind the Texan at both l'Alpe d'Huez and Besancon, trailing by 1 minute, 1 second each time.

But of the 189 riders present this year, Ullrich is the last to beat Armstrong in a Tour de France time trial, routing him by 1:36 from Gaillac to Cap' Decouverte in 2003 under scorching conditions.

"It's a point-to-point race and with a strong headwind," he said. "There's one bridge, five roundabouts and no turns. It's a serious stage where you can try and take time if possible."

Others say the wind could be a major factor.

"If you have wind on your back it's very fast, but wind against makes it feel like 10 kilometers (6.2 miles) more," said Basso, who finished third in last year's Tour.

Norway's Thor Hushovd believes the race will be decided among Armstrong, Ullrich and Santiago Botero.

"It's for the strong guys like Armstrong, Ullrich and Botero," Hushovd said. "When I saw Armstrong in the Dauphine Libere he looked confident and strong, but Ullrich looks in good condition as well. It's a flat course which favors Ullrich. It will be a tough race."

The team with the best placed riders in Saturday's time trial will start last Tuesday. This is a significant advantage because it gives the team a chance to see how quick others are and which parts of the course seem tricky. It also is an indicator of a team's overall strength.

Last year, Armstrong's U.S. Postal team earned the right to start last in the team time trial and won it convincingly, giving him the ideal platform on which to build his sixth win.

Gaining time advantages and morale boosters early in the Tour is crucial before heading into the three daunting Alpine climbs that follow between July 12-14.