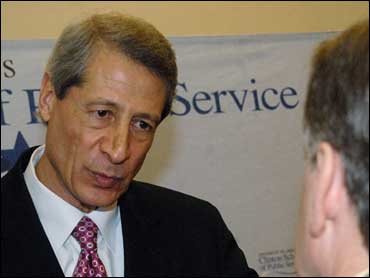 A previously unknown fault in eastern Arkansas could trigger a magnitude 7 earthquake with an epicenter near a major natural gas pipeline, a scientist said Wednesday.

Haydar Al-Shukri, the director of the Arkansas Earthquake Center at the University of Arkansas at Little Rock, said the fault is separate from the New Madrid fault responsible for a series of quakes in 1811-12 that caused the Mississippi River to flow backward.

Acres of cotton fields cover the fault west of Marianna, about 100 miles east of Little Rock, but stretches of fine sand mixed with fertile soil gave away the fault's location, Al-Shukri said. Liquefied sand bubbled up through cracks in the earth, while ground radar and digs showed vents that let the sand reach the surface, he said.

The fault, likely created in the last 5,000 years, sparked at least one magnitude 7 earthquake in its history. Such temblors cause massive destruction in their wake.

"This is a very, very dangerous (area) at risk of earthquake," Al-Shukri said. "When you talk about (magnitude) 7 and plus, this is going to be a major disaster."

Al-Shukri did not identify a time frame for the potential earthquake.

Such a quake would affect Little Rock and neighboring states such as Tennessee and Mississippi, Al-Shukri said.

The researcher has said a gas pipeline crossed the newly discovered fault. He declined to name the company that owned the pipeline. Al-Shukri had said in a speech at the University of Arkansas' Clinton School of Public Service that the company was building a large line through the area, mirroring the old one's path.

A map made by the Arkansas Public Service Commission shows an Arkla Energy Resources pipe in the area. A spokeswoman for CenterPoint Energy Inc., which owns Arkla, said Wednesday that the company worked closely with public officials to prepare response plans for earthquakes and other natural disasters.

Pipes are "all over the place," spokeswoman Rebecca Virden said. "We, CenterPoint Energy, or someone else has a pipeline everywhere."

Carl Weimer, executive director of the Pipeline Safety Trust in Bellingham, Wash., said companies with lines running through earthquake-prone Southern California have extra safety features including "more valves and different types of valves in case something happens and the pipeline can be shut off quicker."

Clint Stephens, the chief of pipeline safety at the commission, said the federal government would oversee any interstate lines. The U.S. Department of Transportation's Office of Pipeline Safety did not immediately respond to a request for comment.

Hundreds of earthquakes occur each year, including several in Arkansas. Most Arkansas earthquakes occur in the state's northeast corner in the New Madrid Seismic Zone, but Al-Shukri said the Marianna fault was not connected because it was too far from the temblors caused by that zone.

During the winter of 1811 and 1812, a series of three earthquakes with magnitudes of around 8 struck the zone and much smaller temblors continue to hit today.