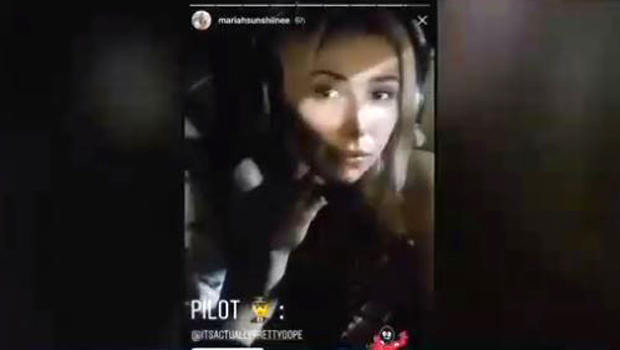 A new video has emerged showing passengers on a small plane before it crashed on an Arizona golf course Monday night, killing everyone onboard, CBS Phoenix affiliate KPHO-TV reports. The Piper PA-24 Comanche was carrying six people when it crashed in Scottsdale.

In the video, Mariah Coogan, a model who had been training horses in San Diego, turned her cellphone's camera to Anand "Happy" Patel, a 26-year-old entrepreneur from Los Angeles who was sitting next to her, before takeoff. Patel flashed a peace sign and smiled.

His twin brother Akash Patel told KPHO-TV that his parents are in denial.

Coogan's family told KPHO-TV that she will be missed.

The pilot has been identified by friends as 28-year-old James Pedroza of Las Vegas, the station reports.

His final call to air traffic control didn't indicate there were any problems during the flight to Las Vegas.

"Are you experiencing any difficulty?" an air traffic controller asked.

The plane crashed right after that call.

The plane went down on the TPC Scottsdale Champions Golf Course - the sister to the Stadium Course where the PGA's Waste Management Phoenix Open is held each February.

Nobody on the ground was hurt, said Kevin Watts, a Scottsdale Police Department spokesman.

Investigators at the site Tuesday morning examined the burned wreckage next to a tree.

National Transportation Safety Board investigator Eliott Simpson told reporters that investigators were working to "gather as much evidence as we can and try not to jump to conclusions" about a possible crash cause.

He added that investigators will document how the plane hit the ground and determine if it hit any trees on the golf course and examine the burn scar left by the plane.

"Today, we're going to be basically gathering perishable evidence and on-scene data, actual data gathering," Simpson told reporters. The evidence will then be taken to a remote for storage facility for closer examination, he said.

Simpson said investigators will also listen to the audio tape of the pilot talking to the airport tower during takeoff.

The NTSB will issue a preliminary report on circumstances of the crash within two weeks, said spokesman Eric Weiss.