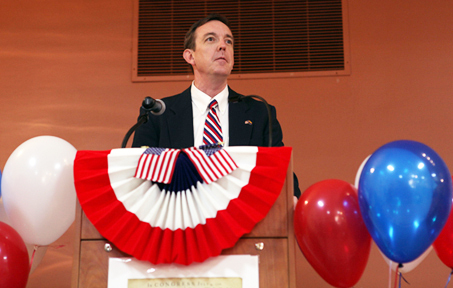 Arizona Secretary of State Ken Bennett is suggesting that President Obama lied about his birthplace in order to improve his odds in getting into college.

Bennett, the co-chairman of Mitt Romney's presidential campaign in Arizona, recently told Republicans there that he believes the president "was fibbing about being born in Kenya when he was trying to get into college and doing things like writing a book and on and on and on."

"So if there was weird stuff going on I think it was back in his college days," Bennett continued. "Because I think he has spent one and a half or two million dollars through attorneys to have all of the college records and all of that stuff sealed. So if you're spending money to seal something, that's probably where the hanky panky was going on."

Talking Points Memo first reported the comments, which were uploaded to YouTube on Monday. (See them at left, starting at the 6:45 mark.)

Last month, Bennett suggestedhe might keep Mr. Obama off the Arizona ballot in November without further evidence the president was be born in the United States. While insisting he was not a birther, Bennett said his "responsibility as secretary of state is to make sure the ballots in Arizona are correct and that those people whose names are on the ballot have met the qualifications for the office they are seeking."

Bennett said at the time he was hoping to get Hawaiian state officials to verify that the birth certificate released by the president is authentic.

There is no serious evidence to contradict Mr. Obama's assertion that he was born in Hawaii; he released his long-form birth certificate last April, and his birth was announced at the time in two Hawaii newspapers.

Bennett later apologized over the controversy he created "if I embarrassed the state."

"I think I touched the third rail or something, you know," he says in the video above. In the video, he also says that he personally believes the president was born in Hawaii and that "within another 36 hours of [his comments] exploding nationwide we got the verification from Hawaii and in my opinion the case was closed."

Bennett's questioning of the president's birth may be related to the fact that he is hoping to take over for Gov. Jan Brewer, R-Ariz., when her term ends in two years. According to the Arizona Capitol Times, Bennett has been collecting signatures to get on the 2014 ballot.

Despite having repeatedly been debunked, birther and other conspiracy theories charging that Mr. Obama has lied about his origins seem to be popular with a significant portion of the Arizona Republican electorate. In March, controversial Arizona Sheriff Joe Arpaio of Maricopa County, who has been elected five times, announced that his own investigation had found "that the long form birth certificate was manufactured electronically and that it did not originate in the paper format as presented by the White House."