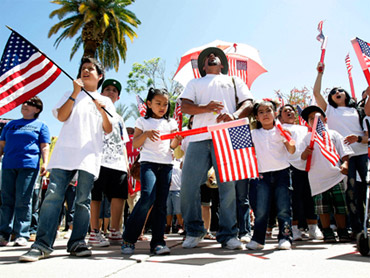 Arizona Gov. Jan Brewer on Thursday formed a task force of tourism officials and business leaders to help the state's struggling tourism industry in the face of what she called "mistruths" about the state's controversial new law targeting illegal immigration.

Brewer met privately with tourism industry leaders and later told reporters that she was forming a group of industry representatives and state officials to prepare a marketing strategy to deal with public criticism of the law.

Critics have said the law could lead to racial profiling, and some groups and city governments have called for boycotts of Arizona and its businesses. Arizona's tourism board estimates it is losing $90 million to boycotts already, reports CBS News correspondent Bill Whitaker.

She also said people mistakenly believe that just anybody walking on a street could be asked to produce identification.

"The bottom line is there are a lot of mistruths about the bill," she said. "You're not going to walk down the street and get questioned unless you've committed a crime."

"There was no discussion of it," Johnson said.

The state will provide startup funding of $250,000 for the marketing campaign, which will start by reviving a past effort to urge Arizonans to vacation in their own state, Johnson added.

Other details, including what messages to aim to non-Arizonans, haven't been decided, Johnson said.

Brewer said she was concerned about the boycott calls, saying lost trade would harm the state, its tourism industry and "a lot of innocent people."

"We want everyone to continue to come here," she said.

"The concern is about the 200,000 families that are trying to make a living," she said.