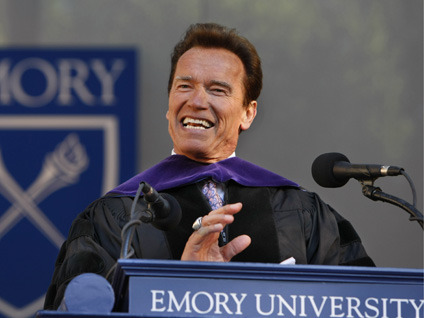 California Gov. Arnold Schwarzenegger has already expressed his opposition to Arizona's controversial new immigration law, and in a commencement address he gave Monday in Atlanta, he couldn't help but take a crack at the law.

"I was also going to give a graduation speech in Arizona this weekend. But with my accent, I was afraid they would try to deport me," the Republican governor joked in his speech at Emory University.

Arizona's new law, slated to go into effect in July, requires immigrants to carry documents verifying their immigration status. It also requires police officers to question a person about his or her immigration status after a "lawful stop" if there is "reasonable suspicion" that person may be illegally in the country.

The law has prompted protests nationwide, and a number of local lawmakers in California are moving to cut off their economic ties with Arizona.

"I would never do that in California. No way," he said.

The entertainer-turned-politician's Austrian accent is often parodied, and Schwarzenegger has said in the past it is important for immigrants to learn English.