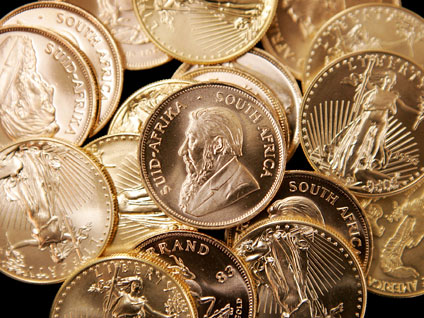 Did you leave your wallet at home?

It could be no big deal if you live in Arizona, where you may soon be able to pay for goods and services with gold and silver.

The Arizona state Senate on Tuesday approved a bill that would make gold and silver legal currency in the state. The bill, previously approved by the Arizona state House of Representatives, is headed to Gov. Jan Brewer's desk, and if she signs it, the measure would take effect in 2014, making Arizona the second state in the country to recognize precious metals as legal tender. Brewer, a Republican, has yet to weigh in on whether she supports the proposal.

Proponents have hawked the measure as a hedge against inflation, arguing that the declining value of the dollar could make gold and silver a more stable form of capital. Loren Gatch, a professor at the University of Central Oklahoma, told Bloomberg News that the legislation is a mark of protest against the easy money policies being pursued by the U.S. Federal Reserve under Chairman Ben Bernanke.

"This legislation is about signaling discontent with monetary policy and about what Ben Bernanke is doing," Gatch said. "There is a fear that the government, or Bernanke in particular, and the Federal Reserve, is pursuing a policy that will lead to the collapse of the dollar. That's what is behind it."

Due to persistently high unemployment (and the inability of gridlocked Washington to agree on robust fiscal policy measures to address it), Bernanke has adopted a policy called "quantitative easing," now in its third iteration, that injects capital into the U.S. economy by essentially printing money. Though dissidents have warned that Bernanke's permissive monetary policy risks setting off an inflationary spiral, the value of the dollar has remained relatively stable in the four-plus years since the financial meltdown of 2008.

Democrats who voted against the measure in the Arizona legislature warned that it would unduly burden businesses, forcing employees to inspect and weigh the precious metals before accepting them as payment. As a result, the bill would only allow precious metals to be used as currency if a business agrees to accept them.

"Businesses are not clamoring for this, to say the least," said Democratic state senator Steve Farley of Tucson, according to the Associated Press. "This is basically growing the size and scope of government to create an entirely new currency system."

Farley also noted that the price of gold saw a significant drop in early April, arguing that such a fluctuation should belie the notion that precious metals are a safer investment than traditional currency.

"Anybody who thinks gold or silver is a safe place to put your money had better think again," he said.

A call placed to Brewer's office seeking comment on the legislation was not immediately returned on Wednesday.

In 2011, Utah became the first state in the country to recognize gold and silver as legal tender. Lawmakers in Minnesota, Idaho, South Carolina, and other states have proposed similar laws in recent years.

Gold-backed currency neared obsolescence during World War I as the United States and many other countries printed cash to finance wartime expenditures. The gold standard, which pegged the value of the dollar to a specified amount of gold and allowed people to exchange paper currency for gold, was formally abandoned by President Richard Nixon in 1971.

Secret Service to respond to Jan. 6 committee regarding Trump's actions
Thanks for reading CBS NEWS.
Create your free account or log in
for more features.
View CBS News In
CBS News App Open
Chrome Safari Continue
Be the first to know
Get browser notifications for breaking news, live events, and exclusive reporting.